Is anyone else getting a little tired of people using the burka as a symbol of female rights instead of what it is? It is an oppressive garment forced upon women by the men of their religion because it’s easier to force the women to cover themselves than it is to repress their own desires to rape everything they see.

Apparently, Alicia Keys didn’t know that before she went and posted a picture of a burka-wearing ballerina in support of equality. 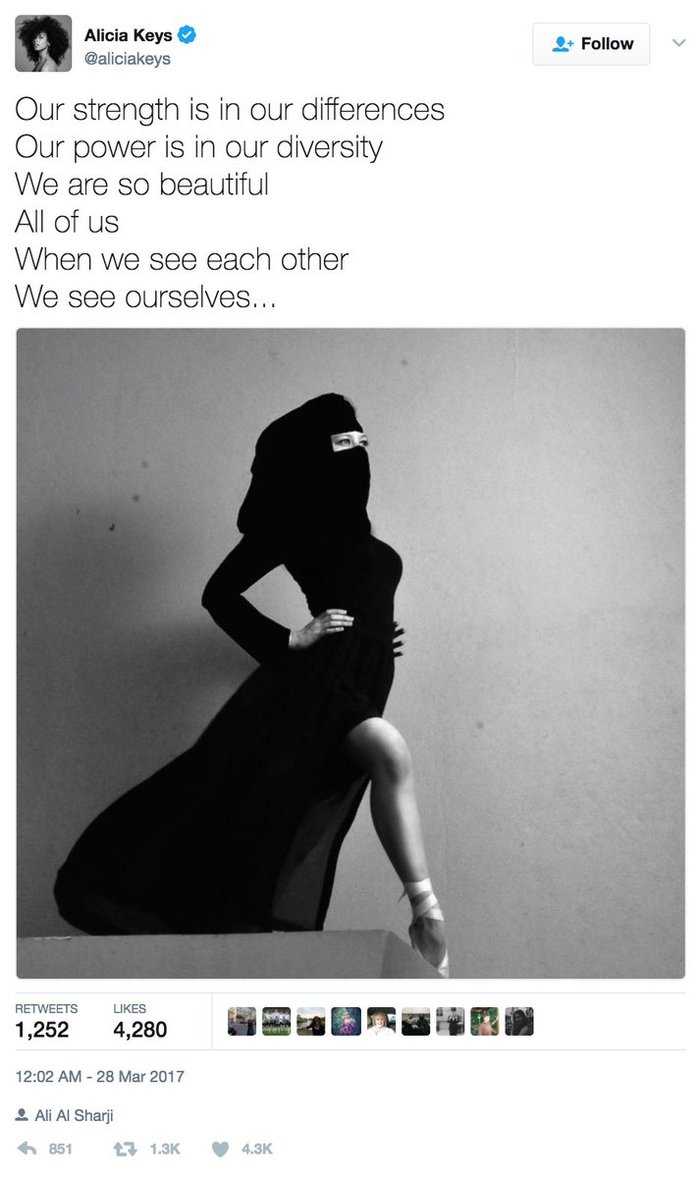 From Chicks on the Right[2]:

Earlier this week, liberals celebrated the hijab and called it a symbol of resistance and feminism[3]. That’s right. The hijab. The same hijab that many women in the Middle East are forced to wear against their will. Ask those women what would happen if they went out of the house without one on. I dare you.

This is all about virtue-signaling. That’s it. It’s about looking like a tolerant, compassionate, open-minded, culturally enriched individual. Liberals look to American Muslims and go, “Look! It’s about freedom! They’re choosing to wear those!” That may be true, but it’s only because they live in America. We’re not going to beat them in the streets for taking them off. Women elsewhere don’t have that luxury.

That brings me to Alicia Keys’ completely stupid tweet.

Wow. She’s going beyond the hijab. This burka style is even MORE empowering!

Clearly, Alicia Keys is blissfully unaware of Islam’s fundamental tenets of female oppression. She also fails to realize that a woman in the Middle East would likely be beaten (probably by her male guardians[4]) in the streets for daring to show her leg. (Standing too close to your boyfriend also warrants severe punishment[5]. Just for the record.)

Twitter, of course, was right there to respond to the tweet as soon as it was posted.

Pop star manages to objectify, demean, insult, baffle, sexualize, patronize, and gaslight the other 3.5bn women on Earth, all at once . https://t.co/pONe0BfJQU[6]

@CounterMoonbat[11] How is this empowering? How is this diverse? If everyone wore that there would be no individual diversity of self.

I’m sure that from Hollywood, the burka seems like a hip, trendy article of clothing that one can remove whenever it goes out of fashion, but that’s simply not the case.

While the singer deleted her tweet, the evidence of her betrayal of women still remains.