I’m not a huge fan[1] of Omarosa, but she was awesome in this confrontation. She doesn’t intend to stand still for bullying… from anyone. Omarosa was at a panel discussion at the National Association of Black Journalists conference in New Orleans, when she got into it with BET host Ed Gordon who was trashing President Trump. He got in Omarosa’s face and that was a huge mistake. She happily smacked him down and hard.

Gordon was accusing Trump of sanctioning police brutality because he said that the police didn’t need to be too gentle with gang bangers. That’s not what he meant at all. Then Gordon brought up Omarosa’s murdered father and brother which had nothing to do with the police or Trump and that was the last straw. He was bullying Omarosa over talking to the President. What a troll and an evil, racist, cop-hating jerk. So typical of the left and those cuddling with Black Lives Matter. Just gotta love Marxist journalist hacks. 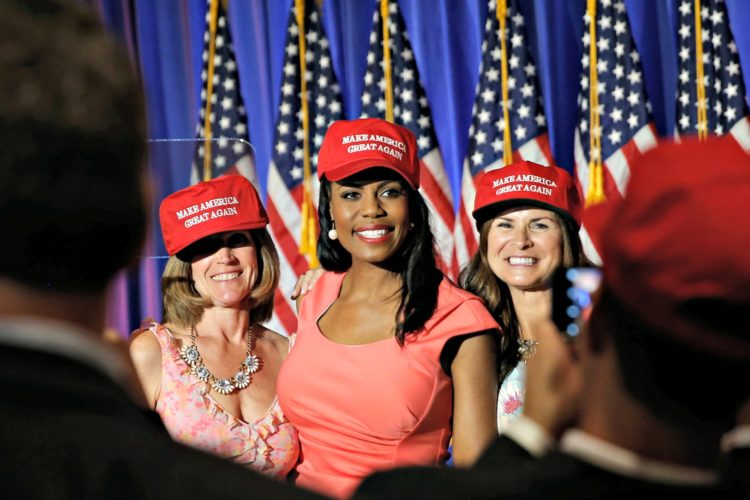 Don’t mess with Omarosa Manigault. Because, like President Trump, she will not bullied into submission.

Manigault smacked down BET host Ed Gordon when he got aggressive during a panel discussion at the National Association of Black Journalists conference in New Orleans.

The argument erupted when Gordon, who was moderating the panel, repeatedly trashed President Trump and got snarky with Manigault.

Gordon claimed Trump was promoting police brutality when he joked last month about cops being too easy on violent criminals during arrests.

Gordon kept asking Omarosa if she had spoken to the president about the comments. “I don’t disclose confidential conversations,” said Manigault, who’s the director of communications for the Office of Public Liaison for the Trump administration.

When Gordon wouldn’t let up and kept trashing Trump, Omarosa got annoyed. But when he crossed the line by bringing up her late father and brother (who were murdered in separate incidents not involving the police), Manigault stood up, grabbed a microphone, and shut Gordon down.

“Don’t be aggressive,” Manigault said. “Ask your questions but don’t lecture me.”

Omarosa is a special assistant to the President. She’s not a wallflower and is an aggressive, smart businesswoman. Just her being at the event caused a firestorm of controversy, but she stood her ground. Good for her. New York Times journalist Nikole Hannah-Jones, who was originally booked to moderate the panel, pulled out because of Omarosa being invited. Such tolerance on the left. What hypocrites.

I don’t know why they had her come if they were just going to attack Omarosa. This is why the divide between the left and right is getting wider and wider. The left tells lie after lie about President Trump, no matter how outrageous or over the top they are. There’s no diversity here… just hate and racism. Oh, and massive cop-hatred. Omarosa handled herself very well here. If it had been me, I would have told him off and walked out. Hell, I wouldn’t have even bothered to go. It’s a waste of time and breath.