Beyonce seems like an odd choice to perform at the Country Music Awards. She isn’t a country music artist and her values definitely don’t line up with those of most country music fans. But she did perform, along with the Dixie Chicks, singing her song “Daddy Lessons.” And not everyone was happy about it. 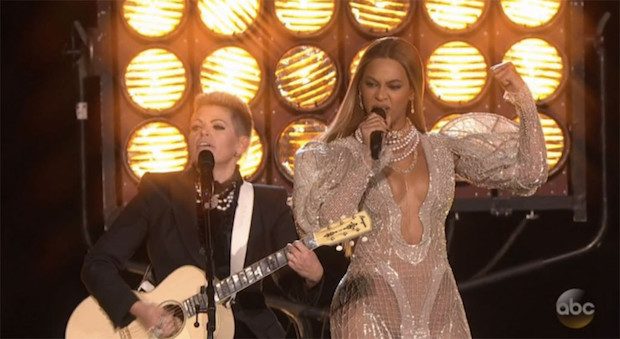 Country music often has religious themes, pro-military lyrics and is certainly gun-friendly. And for what it’s worth, “Daddy Lessons” did have some pro-gun lyrics.

But the Dixie Chicks have been country music outcasts ever since they performed overseas and took the opportunity to insult President George W. Bush, so it makes sense that they performed with Beyonce — a left-wing cop-hater.

While some were happy about Beyonce’s performance, others were not as happy.

Beyonce and the #DixieChicks[4] are a disgrace to the #CMAawards50[2].

Shameful the #CMAawards50[2] allows a cop hating, Anti-American Racist on their stage! When did country music lose its way?#SellOuts[6] #Beyonce[7]

But perhaps most amusing was the reaction of the country music superstars in attendance. Kenny Chesney in particular was not impressed. And he was the recipient of the CMA’s Pinnacle Award, an honor only given to Garth Brooks and Taylor Swift to recognize their contributions to the genre. So, he was completely justified in making this face:

Kenny Chesney was not entertained by Beyonce's performance. #CMAawards50[2] pic.twitter.com/2dmWCE5I7Y[9]