This is good news.[1] Bill O’Reilly and Sean Hannity are reportedly considering teaming up to form a new television network. An uber connected journalist, New York Magazine’s Gabriel Sherman, who covers Fox News, claims that O’Reilly is in talks with Hannity to join Sinclair Broadcasting. They are a conservative media network that has massive reach. Sherman is an MSNBC contributor and outed the possibility this weekend. I hope this is true and not more fake news.

If this happens, Sinclair could take a huge leap in market share because of conservatives who are currently very disappointed with Fox News. This could really hurt the already reeling network. Meh. They made their bed, let them lay in it. Sherman followed up his MSNBC appearance by reiterating his on-air comments. He also added that O’Reilly has been in talks with Newsmax TV. Sinclair is a much more likely choice here as they are much bigger with a vast audience and much more capital. 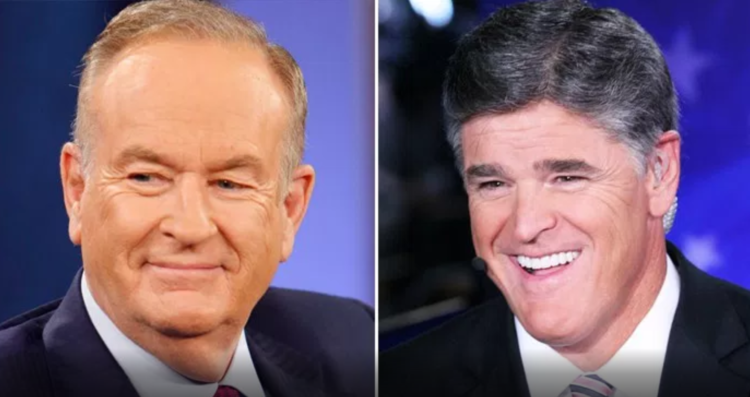 According to New York Magazine’s Gabriel Sherman, who is one of the most connected journalists covering Fox News, O’Reilly is in talks with Hannity to join Sinclair Broadcasting, a conservative-leaning news network that has a massive reach.

“My sources in and around Fox say that [Hannity] and Bill O’Reilly are potentially in talks to take their shows to Sinclair,” Sherman said. “Bill O’Reilly has wanted to get back into the game.”

“So Sinclair has really wants to build the future of a conservative media empire and poaching Fox’s biggest names would help them do that,” he explained. “This, again, is the groundwork for what I think will be the next conservative media platform in the post-Roger Ailes era.”

Sherman also said that he’s very skeptical of the O’Reilly/Hannity alliance because they have not been the best of friends over the years. Friendship is one thing, business is another. I guess we’ll see. Fox dumped O’Reilly over trumped up sexual harassment allegations. They haven’t cut Hannity loose yet, but he’s not rock solid there either. I’d be padding my bets if I were him.

O’Reilly was Fox’s number one draw. Their ratings plummeted after he left and they have yet to recover. Their only real big name that is left is Sean Hannity. But I have a feeling that the Murdoch boys don’t care. They have a new, non-conservative vision for Fox News and I still believe that Hannity will eventually be cut loose.

O’Reilly still wants to do a show and he will land somewhere. He’s already appearing weekly on Glenn Beck’s show and he’s been saying he’s got plans to return and do a show one way or the other. Wherever O’Reilly and Hannity wind up, they have huge audiences that will follow them. It should be interesting.

[email protected][3]'s sources tell him Bill O'Reilly could be coming back to TV via Sinclair media. Thoughts? #AMJoy[4] https://t.co/RTQOE82QR1[5]

As I reported this morning on @amjoyshow[7], Bill O'Reilly has talked Hannity about teaming up to go to Sinclair Broadcasting, sources say.