Colin Kaepernick is the insanely wealthy professional football player who refused to stand for the National Anthem recently, claiming he was “oppressed” and caused a nationwide uproar. But blogger Matt Walsh isn’t buying it — according to him, Kaepernick isn’t oppressed at all. He’s just spoiled. 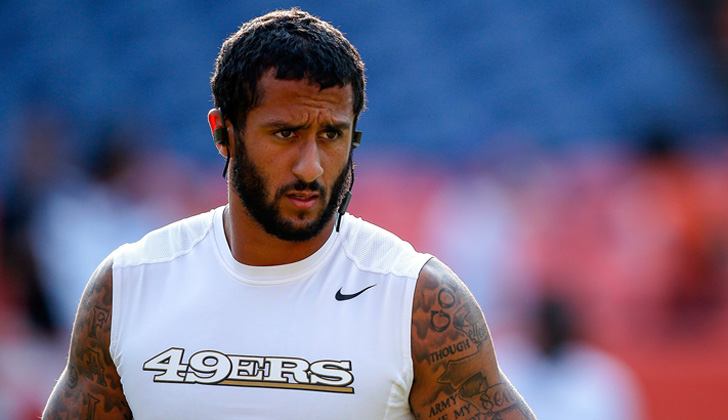 Now, as a somewhat cynical observer, I must confess that I struggle to see where the ”courage” comes into play here. You attempted to highlight your own bravery (a big red flag, by the way) by speculating that you might lose your endorsement deals and maybe even your job because of your statement. What you failed to mention is that you were sure to lose both of those things anyway because you’re not a very good quarterback. Indeed, it’s kind of curious that you stood for the national anthem every other year of your football career, right up until this summer, when you just so happened to be weeks away from getting beat for the starting job by a castoff from the Jacksonville Jaguars. It seems that your willingness to “lose your job because of your beliefs” is similar to my willingness to forfeit my chance at getting accepted into the NASA astronaut candidate program because of mine.

In fact, now that you’ve become a political activist, you might make the team just because the 49ers don’t want to be accused of firing you for being a political activist. And if you don’t make the team, you can always cite your activism as the reason, rather than your 78.5 quarterback rating. I’m sure this is all just a coincidence, but it does seem awfully similar to the fabled Michael Sam strategy, which is to compete for a spot on the team not by becoming a better player but by becoming a sacred cow. If that’s what you were shooting for, the good news is that it may indeed be enough to extend your NFL life a little while. The bad news is that eventually everyone will stop caring and before long you’ll be up north tossing interceptions for the Edmonton Eskimos. I don’t know that you’ll find Canada preferable to the United States, but at least you can stand for their anthem without your conscience feeling so burdened. Or maybe not.

One thing is for sure: You didn’t seem to too worried about oppression when you turned your garage into a walk-in closet to house for your massive collection of shoes, most of which were stitched together in Chinese sweatshops by starving children working for 30 cents an hour, and then marketed and sold at four times the cost to poor black kids who should be buying books instead of gaudy, overpriced sneakers. I don’t think any self-respecting man should have more than a few pair in the first place, but I can’t imagine how a humanitarian like yourself, who’s so publicly and demonstratively disgusted by “oppression,” could buy 500 shoes that were made by slaves on the other side of the world. Call me a stickler, but that seems a little inconsistent. Even hypocritical.

But putting aside these interesting questions about your sincerity and integrity, I think it could be worthwhile to address your points at face value. As far as that goes, it seems you have only the one point, and it’s a point we’ve heard a million times before, often from wealthy black or biracial athletes like yourself, or from our black president, or from our black attorney general, or from various black congressmen and media members, or from black pop stars, or from black mayors of cities with police departments run by black people. All of these figures — some of them among the richest and most powerful in the world — tell us the same thing: America is a racist country that systematically oppresses its black citizens.

If that’s true, it must be said that America is, without a doubt, the most clumsy and ineffectual racial oppressor in history. When North Korea oppresses its citizens, they starve to death. When African warlords oppress their people, entire villages are butchered and burned. When ISIS oppresses the people it conquers, women and children are raped and killed. When America oppresses racial minorities, they become presidents and NFL quarterbacks. There seems to be a disconnect here.

… Of course, all that being said, I admit that minority communities are “targeted” in a certain sense. They’re targeted by Planned Parenthood, which has wiped out millions of black people over the past 40 years. They’re targeted by black musicians who market criminality and gangsterism to black kids who lack proper role models. They’re targeted from within by pimps and thugs and drug dealers who murder, maim, exploit and poison them. They’re targeted by the welfare state, which keeps minority families on the dole and then uses their dependence to manipulate and control them.

These are all legitimate concerns, but they’re not unique to the black community. America has many problems and virtually none of them are exclusively black problems. I am the first to point out that we live in a sick culture that is actively hostile to God, faith and family. We have a huge and out-of-control government that’s eaten away at our liberties. We have a population that has not been vigilant in defending those liberties and has actually embraced tyranny by voting into office the politicians who pledge to continue it. We have a Constitution that has been ignored, a Bill of Rights that has been tossed to the side and religious freedoms that have long been under attack from nefarious forces in the government and outside of it. And I could go on. The point is, I will not disagree with anyone who says that America is in trouble, nor will I take issue with anyone who laments the fact that we as a people have failed to respect and defend the freedoms that so many others have fought and died in order to ensure for us.

You took a different approach because you’re spoiled, not oppressed. You don’t truly understand what this country is supposed to represent, and you don’t appreciate the opportunities it gave you, and so you can’t really understand or appreciate the struggles we actually do face. You have lived arrogantly and ungratefully off the fat of the land, reveling in the kind of fame, wealth and luxury that 99 percent of the population on Earth has never even been near to sniff and that you would have had no chance of attaining if you were born anywhere else on the planet. Yet, like so many other wealth brats in the sports, entertainment and media industries, you have nothing but disdain for the country that gave you everything and for the people who made that possible.

Of course, all of the whining over faux-oppression is probably due to Kaepernick’s girlfriend, who is a Black Lives Matter activist, which makes Kaepernick’s “activism” much more suspect. But hey, maybe this is secret racism. We’ll make black men millionaires by forcing them to play a child’s game as a career! That’ll keep them down!