BOOM! Michael Moore Just Got OWNED In Just This ONE Tweet! – It Is THAT Good!

The question is…[1] if Michael Moore boycotts a state, would they even notice? Actually, I think that would be a bonus. Maybe states will line up now begging for Moore to boycott them. I thought Michael Moore had slinked off into obscurity. No such luck. He’s now declaring that he is boycotting North Carolina because they are such bigots. I mean they won’t let grown men share bathrooms, showers and locker rooms with women and little girls. What is the world coming to? Moore must be a big proponent of rapists and pedophiles… he’s so very concerned about their rights. He hearts perverts who can’t make up their mind what is in their sock drawer on a given day. Moore has a new flop out, entitled: “Where to Invade Next.” It’s actually not what you think, but worse: Moore surveys the uncompetitive labor and economic practices of European nations and figures out which countries we should “invade” in order to integrate those practices. The man is a dedicated dolt who got wealthy off of other American idiots who were dumb enough to actually watch one of this guy’s pieces of garbage. Who says liberals aren’t capitalists at heart. 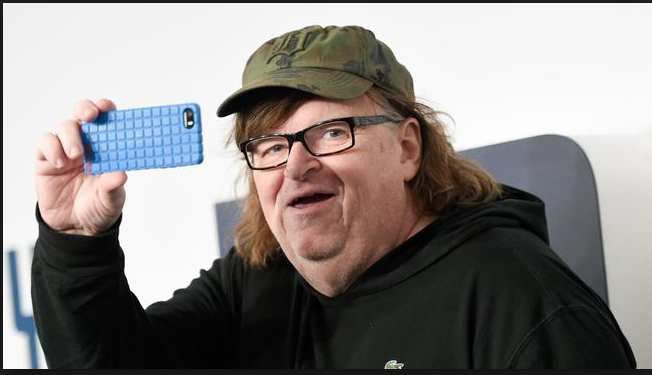 I was surprised to find that Michael Moore, the Leni Riefenstahl of the Rust Belt, was still making movies. I had kind of figured that, like Tom Green or that “Fred” kid with the helium voice from the YouTube videos, he’d deservedly drifted into cinematic obscurity.

But, no. The left’s favorite facile propagandist[3] has a new movie out, “Where to Invade Next.” It’s actually not what you think, but worse: Moore surveys the uncompetitive labor and economic practices of European nations and figures out which countries we should “invade” in order to get those practices.

It’s hard to believe that, almost three decades after his first film asked why General Motors was cutting so many jobs in the United States, he still hasn’t figured out the answer to that question..

But never mind. That’s not what we’re here for: To protest North Carolina’s new law[4] making it mandatory for citizens to use the bathroom of the gender they were born as, Moore has requested that his film not be distributed in North Carolina. Someone quickly pointed out the hypocrisy: 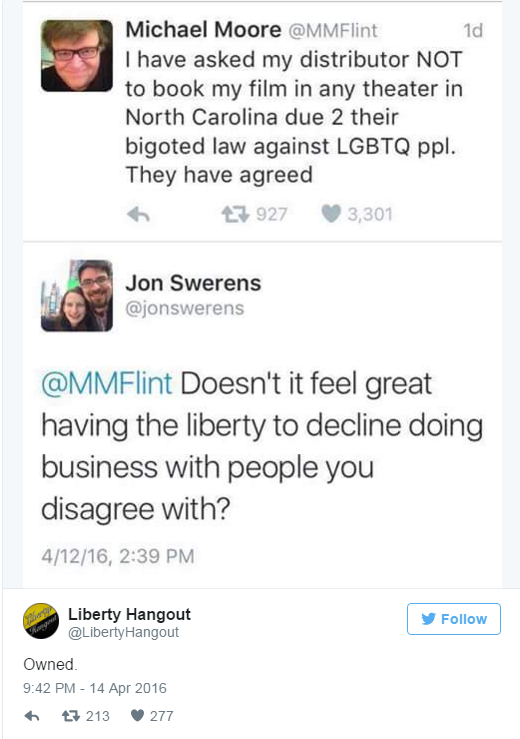 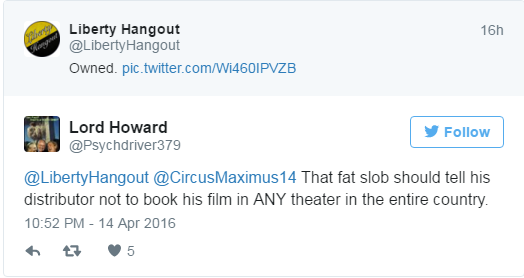 Moore’s tweet online proclaiming his boycotting of North Carolina did not have the effect he was aiming for. He was owned in one epic tweet. North Carolina is simply doing what Moore is doing… declining to do business with those they don’t agree with. Moore is a hypocrite extraordinaire, but you knew that already. I totally and wholeheartedly agree with the Conservative Tribune: “The left believes freedom of conscience only applies to them. If anyone else chooses to exercise their constitutional right to freedom of speech, religion or association, and it somehow clashes with their agenda, then it’s bigotry.” I’m sure North Carolina is breathing a sigh of relief that Michael Moore will stay out of their state. Who knew that morality and sanity were the cure for liberals like Moore? Let’s market that!