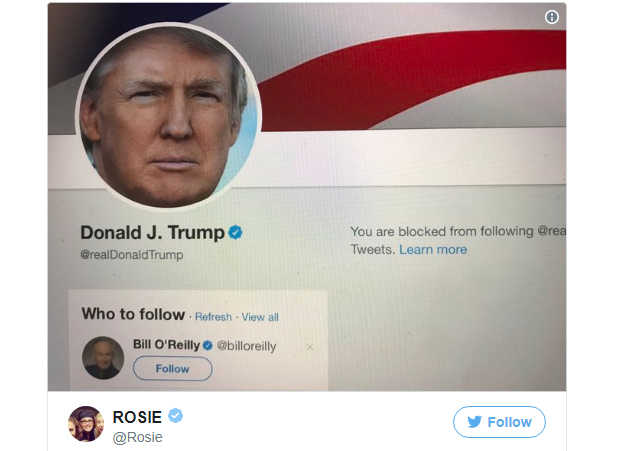 Rosie O’Donnell is crying again about the evil, mean Donald Trump, because this time he’s blocked her on Twitter.

awww @realdonaldtrump[2] – i get it – its too tough to read the truth … poor baby – i understand don – u take care of u – friend #BLOCKED[3] pic.twitter.com/EQxnZarnhE[4]

So long, Rosie! As for Ivanka, she has her own theories about why she never responds when Rosie flips out, either.

Why block someone on Twitter? There are a few reasons. In recent days there has been a spat of liberals proudly showing off their blocks. Whenever Trump tweets, every response is listed along with it. And when the person has a large following, or if they are a “verified user” (usually reserved for celebrities and journalists, which means it’s usually reserved for lefties), their responses are more likely to show up higher on the list.

By blocking someone on Twitter, you are removing the ability for everyone else to see their replies easily.

If you mute someone on Twitter, it means that they can still tweet at you and respond to your tweets, but on your end, you receive no notification. The user who has been muted (in this case, it would be Rosie if this is true) receives no confirmation from the muter (Ivanka) that the action has been taken.

Mute, block, whatever works to get her off the radar. We know she’s a comedian, but I don’t think this is the kind of entertainment we thought we’d be getting from her!

Earlier this year we reported that Rosie O’Donnell didn’t only have a history of being crazy at Trump, but was crazy at her family, too.

Chelsea O’Donnell, Rosie’s daughter[9] says that she haunted by an episode with her ‘drunk’ mother during which the actress locked the teen in her bedroom amongst some other disturbing experiences. The ups and downs following that attack have resulted in the mother and daughter to be estranged.

She’ll still be tweeting about Trump, but she’ll have a lot less firepower now that her visibility has been taken away.