Bruce Springsteen Feels Safe INSULTING America… so long as he’s in THIS country!

Here’s a thought for Bruce Springsteen…[1] don’t hang up, don’t write a letter and don’t come back to America. We don’t want you back. If the Aussies will have you, good for them. Springsteen went to Australia and took the stage to… wait for it… apologize for America. He alluded to the call between President Trump and Prime Minister Malcolm Turnbull. And showing what an utter moron Bruce is, he cited fake news. Donald Trump never hung up on Turnbull. Typical.

Springsteen wasn’t alone in doing this either. Before the Melbourne show, E Street Band guitarist Steve Van Zandt tweeted an apology to Australia:

Australia is, was, and always will be one of the USA's best friends and closest allies. Apologies for today's temporary embarrassment.

You are both royal asshats and you do not speak for America. President Trump did nothing to be embarrassed for, but we are certainly embarrassed by you. What an unpatriotic, despicable thing to do in front of one of our oldest and strongest allies. Springsteen has not bothered to hide the fact that he hates Trump and Melbourne wasn’t the only stop on Springsteen’s Down Under tour where he voiced anti-Trump sentiments. 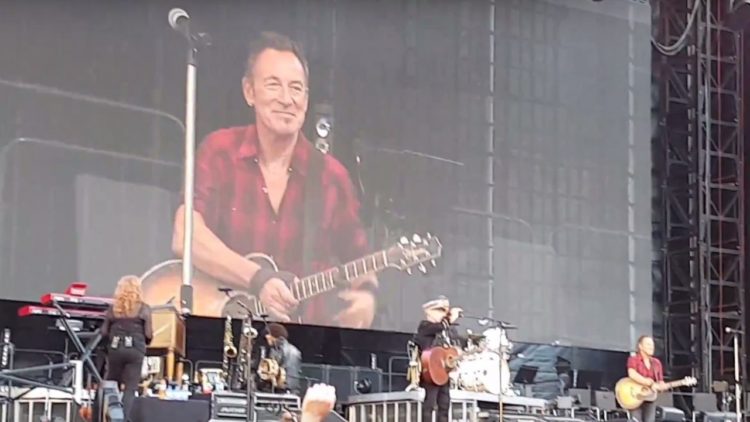 Bruce Springsteen opened his concert in Melbourne, Australia, this week in a rather unorthodox fashion.

Instead of starting off with a rousing number, Springsteen strolled onstage Wednesday with an acoustic guitar and spoke to the crowd.

“We stand before you embarrassed Americans tonight,” Springsteen told the audience as he introduced a ’60s pop tune by a group called the Orlons. “We’re gonna use this to send a letter back home.”

The crowd got the joke pretty quickly, clearly a reference to Republican President Donald Trump’s self-described “tough” phone call[4] with Australian Prime Minister Malcolm Turnbull over the weekend regarding a “dumb” Obama administration agreement to take in 1,250 refugees from an Australian detention center.

But Turnbull denied[5] in a radio interview that the phone call ended angrily or with a hang up: “I want to make one observation about it. The report the president hung up is not correct, the call ended courteously.”

During his Adelaide concert Monday, Springsteen introduced the tune “American Land” as “an immigrant song.” Americans are fine with immigrants who come here legally. And we welcome refugees if they undergo a valid vetting and background check. Springsteen has been an American hater for a long time. He’s an idiot… he despises his own country and the exact actions that would keep it safe. Too much self love and too much booze and drugs.

“Tonight we want to add our voices to the thousands of Americans who are protesting at airports around our country the Muslim Ban and the detention of foreign nationals and refugees,” Springsteen said. “America is a nation of immigrants, and we find this anti-democratic and fundamentally un-American.” Again, please don’t let the American door hit you in the red, white and blue ass, Bruce. You are a Marxist. Perhaps the Middle East would be more to your liking. Or China or Russia. Take your pick.