Calls for Colbert to be REMOVED from CBS Catching Steam [VIDEO]

It would seem[1] that Twitter is on fire demanding the firing of Stephen Colbert for his foul-mouthed rant against President Trump this week on The Late Show. Personally, I think he should be fired too. It wasn’t funny, it was disrespectful and just downright vicious. Lynch has a point, if advertisers were so upset over supposed allegations over sexual harassment against Bill O’Reilly, they should simply be incensed over Colbert’s vile diatribe during his show.

Colbert deserves every bit of backlash he gets over his despicable, unhinged display of hatred for President Trump. Many are taking to Twitter to demand Colbert’s ouster after his perceived homophobic slur. This isn’t the first time viewers have gone on social media demanding Colbert’s removal either. In 2014, a #CancelColbert hashtag was started after the host (on Comedy Central with “The Colbert Report” at that point) joked: “I am willing to show #Asian community I care by introducing the Ching-Chong Ding-Dong Foundation for Sensitivity to Orientals or Whatever,” in a sketch about Washington Redskins’ owner Daniel Snyder’s pro-Native American charity. He should have been fired long ago. Let’s hope his latest stupidity does the trick.

Yesterday, during my Walk & Talk, I expressed my disgust with CBS late night host, Stephen Colbert after he ripped apart President Trump during his opening monologue on Monday. I said, “Colbert should be fired. I wish people would start calling for his immediate firing.” Well, my wish may come true.

Colbert’s opening monologue was disgusting. You can watch it by clicking here.[3]

He ranted, “Sir [Trump], you attract more skinheads than free Rogaine. You have more people marching against you than cancer. You talk like a sign language gorilla that got hit in the head. In fact, the only thing your mouth is good for is being Vladimir Putin’s c–ck holster.”

All day yesterday, and carrying into this morning, social media is on fire with the hashtag#FireColbert.

Some are saying Colbert’s remarks are “homophobic.” Others are saying they will boycott his advertisers. Either way, if someone like O’Reilly is forced out because of allegations against him for sexual harassment, Colbert should be removed for his disrespect for the president, his curse-filled monologue, and his sexual references to Putin and Trump.

If advertisers ran for the hills to get away from O’Reilly, they should begin taking flights to another country to get away from the “The Late Show” and Colbert. It will be interesting to see how it plays out.

Colbert’s show has seen a massive ratings bump since he started trashing President Trump on a regular basis. How sad is that? Liberals and conservatives however seem to be in agreement, albeit for different reasons, that Colbert stepped way over the line this time and needs to get gone. Colbert hasn’t tweeted since Monday. Representatives for Colbert and “The Late Show” are also staying mum at this point.

Since the left is so in love with its hatred of all things Trump, Colbert will probably stay put and may even get a raise over all this. Such is the climate of politics these days. In John Hawkins’ new book, ‘101 Things All Young Adults Should Know’[4], he teaches in number 16 of the book, “Be nice until it’s time to not be nice.” Don’t you think it’s long past time that we treat people like Colbert the way they deserve to be treated? They should be shunned and ignored until they just go away. Here’s hoping Colbert slithers off back to the hole he came out of. 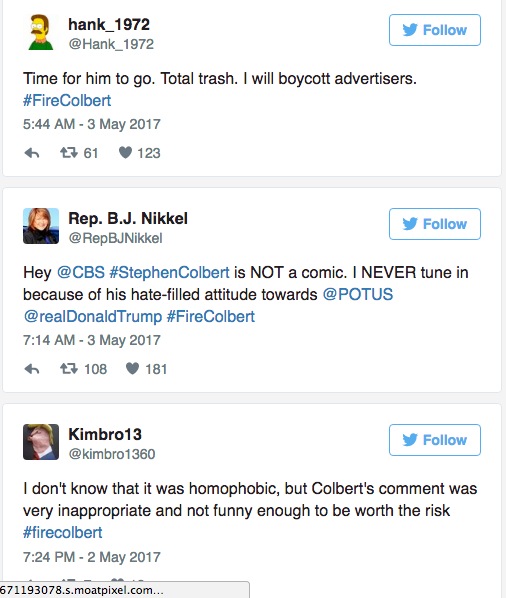 #firecolbert[6] CBS STAND UP AND DO THE RIGHT THING FIRE COLBERT THIS SHOULD NOT BE TOLERATED,IF IT WAS SAID ABOUT OBAMA HE WOULD BE GONE

So, Colbert is saying homophobic things again? Disappointing that CBS supports and empowers this. #firecolbert[6]