Dozens of celebrities and activists have joined a new campaign aimed at derailing the presidential prospects of Republican frontrunner Donald Trump and the “politics of hate and exclusion he represents.” Because of course they would. Morons[1]: 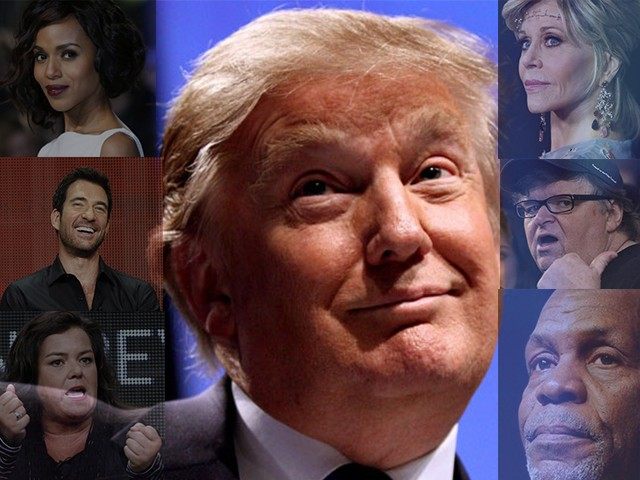 Michael Moore, Kerry Washington, Rosie O’Donnell, Harry Belafonte, Jane Fonda, Dylan McDermott, Roseann Barr, and Lily Tomlin are among the film and television stars who have pledged to “speak out in every way possible” to prevent Trump from becoming the next President of the United States as part of the new “Stop Hate Dump Trump” campaign.

In a statement on its website, the group says it believes Trump is “a grave threat to democracy, freedom, human rights, equality, and the welfare of our country and all our people.”

“We have witnessed Trump inciting hatred against Muslims, immigrants, women, the disabled,” the campaign’s website reads. “We have seen him evidencing dangerous tendencies that threaten the bedrock of democracy: unleashing a lynch mob mentality against protesters, calling for the expulsion of Muslims from the country, bullying, and fear-mongering.”

“History has shown us what happens when people refuse to stand against hate-filled leaders,” statement continues. “We pledge ourselves to speak out in every way possible against the politics of hate and exclusion he represents.”

“We are offering Americans a chance to be heard and engage in action, as Trump’s campaign gains momentum even as he increases his hateful and divisive rhetoric,” Ensler said in a statement.

At the time of publication, the campaign had gathered 780 signatures.

The campaign website features a number of examples of what it calls Trump’s “hate,” including statements that are critical of former Secretary of State and Democrat presidential candidate Hillary Clinton. The group also included Trump’s vow to “blow up” and defeat the Islamic State terror group in its list of hateful comments the candidate has said.

Other celebrities have launched their own anti-Trump campaigns in recent months.

This is the stupidest crap ever. Really? Organizing am anti-Trump campaign?

You guys really need to look into getting a life.