Can this “lady” just go away? I’m getting really sick of her elitist attitude and her constant need to insult people she doesn’t agree with. We get it, you’re a liberal.

Take his golden sticker and go away. 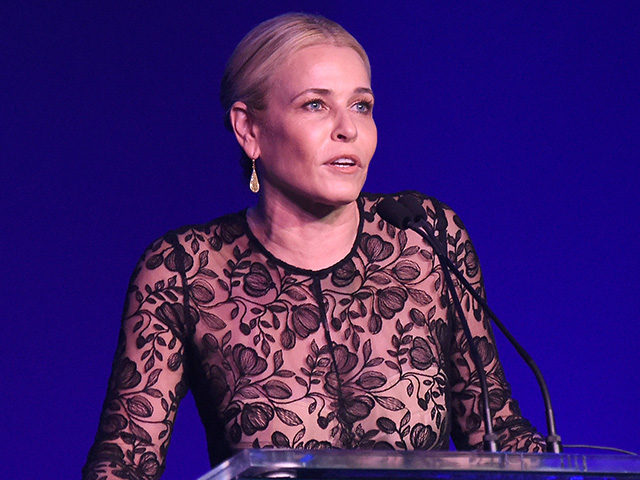 Talk show host Chelsea Handler called President Donald Trump a “f*cking loser” at a benefit for the Los Angeles Public Library Saturday night, as she joked that Trump’s bestselling book The Art of the Deal had made a significant “impact” on her life.

“I think the way we have come together is so inspiring,” the 42-year-old Chelsea host said at the Young Literati Toast in Los Angeles, according to the Hollywood Reporter.

“I would have hoped that would have happened before the election, but I’ll f*cking take it because it’s so much better to be friends with people you would never talk to before just because we all know that Donald Trump is a f*cking loser,” she added.

The Saturday night event, held by the Library Foundation of Los Angeles to benefit the L.A. Public Library, saw a number of celebrities — including Silicon Valley star Kumail Nanjiani, Veep‘s Timothy Simons and Fresh Off the Boat actress Constance Wu — read excerpts from books that have inspired them.

“I was browsing through the books in the library and came across a book that would change the course of my life forever,” Handler reportedly said about The Art of the Deal, Trump’s 1987 bestseller. “The story of this man’s struggles, successes and setbacks were exactly what I needed because of the impact it has made in my life.”

According to THR, the money raised at Saturday’s event will go to pay for the establishment of so-called Student Zones at the library, where children can have access to computers, school supplies, and tutoring.

Really? You’re at one of the world’s most non-political events and you have to take the time to insult the President? Why? Is it because he doesn’t flirt with women like you, who look like leather purse knock-offs?

Let it go, or else people are going to start questioning just how “tolerant” and “accepting” liberals really are.