I guess Hanoi Jane Fonda[1] is still kicking after all. I haven’t seen Tim Robbins in anything in years. As far as Jamie Lee Curtis, that’s a shame… I actually liked her. This is why I try to keep my entertainment separate from politics… it just ruins everything you think of someone. In what is being billed as a Facebook “Love-a-thon,” these uber commie leftists are getting together to entertain those who won’t be watching Donald Trump’s Inauguration. The attendance will be very low, I would wager.

They are raising money for their favorite Progressive causes like Planned Parenthood, the ACLU and Earthjustice. Wow, sounds like an event to not remember, if you ask me. Three solid hours of liberal bull poop. No thank you. You’ve got Jamie Lee Curtis and her hubby Christopher Guest (who?), Judd Apatow (who?), Patricia Arquette, Time Robbins and Jane Fonda all trying to make the day about them and their deceased careers instead of Trump. Fail. The event’s organizers[2] — which include tech PR consultant Kara Silverman and Sam Koppelman, digital content strategist at Hillary for America — hope to raise a minimum of $500,000. 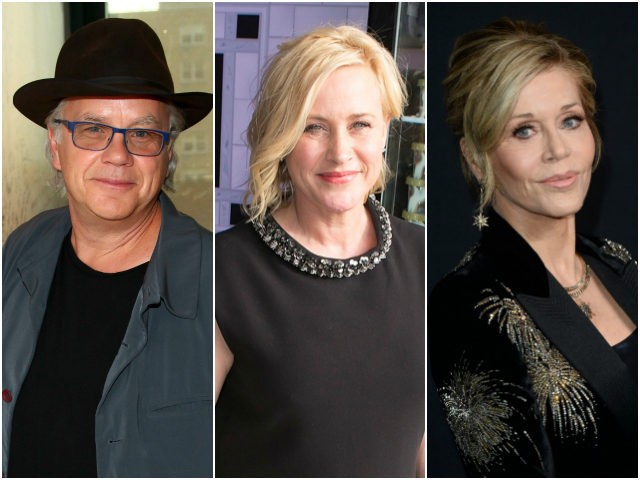 After the miserable failure of every single previous attempt they sponsored to stop Donald Trump from becoming president, a list of celebrities is making another desperate call for attention in the name of stopping the inevitable.

In their latest collective tantrum, celebs are sponsoring a Facebook “love-a-thon” broadcast scheduled to run during Trump’s January 20 inaugural ceremony.

“This Inauguration Day join us for a three-hour Facebook Live broadcast with music, entertainment, and stories about causes that matter. It’s time to take a stand,” the event’s website says.

The B-list celebrities planning the online protest hope to raise $500,000 to be given to abortion mill operator Planned Parenthood as well as enviro-extremists Earthjustice, and the liberal ACLU.

Mark Ross (again, who?) has claimed he is working on what he calls the “We The People” concert for the same day. I think this is the celebrity shindig in Florida headlining a whole bunch of sore losers who hate Trump. Though there has yet to be any official announcement of performers, those rumored to be involved include Lady Gaga, Jay-Z, Beyonce, Katy Perry, Justin Timberlake, Madonna, Bruce Springsteen and Jon Bon Jovi. More must miss TV.

These leftist jerks are demanding that all of Trump’s nominees for the Supreme Court, his Cabinet appointees and other appointments be blocked for the duration of his presidency. This is going to be a brutal four years. My money’s on Trump. I’ll be watching the Inauguration… I have no use for these commie celebrities and their so-called ’causes’. They are what broke our system in the first place.