First off[1], I never saw “OJ: Made in America.” No desire to – I don’t want to reminisce about that butcher and how he got away with it. That whole affair was a travesty of justice and a monstrous disgrace for American jurisprudence. At the Oscars last night, evidently it won some awards. Then Jimmy Kimmel, who went on a Trump-bashing tirade at the beginning I understand, made a lame OJ joke about him getting an extra slice of baloney on his sandwich for the night. The best reaction by far was from Mel Gibson. The rest of the Hollywood audience cringed. Gibson laughed… heartily. Probably because it was a very un-PC joke.

Unfortunately, the cruel laugh may be on all of us as it is expected that soon OJ will be released from prison. He has served nine years of a 33-year sentence and is about to be paroled for good behavior. No blonde females in prison to nearly decapitate, so he hasn’t had much to do I suppose. I doubt that the jokes will be so plentiful once he is a free man again. Frankly, the whole affair should have had him on death row and long gone by now… but as Kimmel said… it’s 2017. 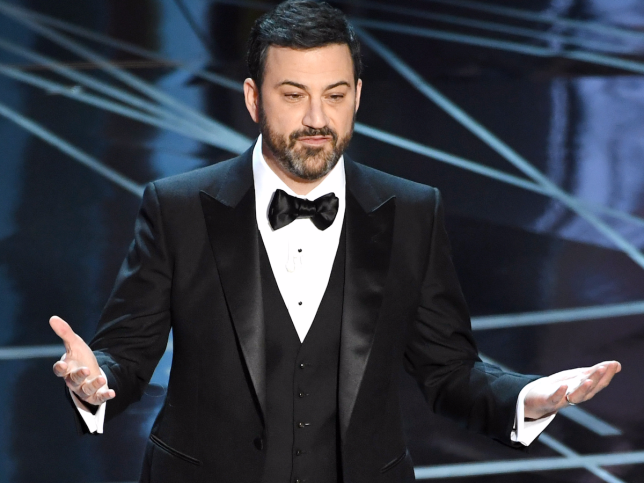 Comedian Jimmy Kimmel wasn’t afraid to get edgy during the Oscars on Sunday night. In fact, he made Mel Gibson crack up with his O.J. Simpson joke while much of the rest of the audience cringed.

After “OJ: Made in America” won the Oscar for best documentary, Kimmel made the brutal joke at Simpson’s expense.

“I didn’t know we’d be doing this in 2017, but we are — that’s the simple fact of the matter,” Kimmel said. “O.J., you get an extra slice of baloney on your sandwich tonight.”

Much of the Hollywood crowd reacted in shock. Meanwhile, Mel Gibson had the absolute best reaction.

His reaction was notably different than those of some of his colleagues.

I’m not ashamed to say I genuinely like Mel Gibson. He’s had some rough patches, but has come back nicely. He’s far preferable to most in that audience. Kimmel is lame and not funny. He’s politicized himself far too much. He’s a hypocrite as well: “If every one of you took a moment to reach out to one person you disagree with, someone you like, and have a positive conversation again, not as liberals and conservatives, but as people, we can make America great again,” Kimmel said. “It starts with us.” Then he totally reverses and goes after Trump: “I want to say thank you to President Trump,” Kimmel said. “Remember last year when it seemed like the Oscars were racist?” What a jerk.

It’s good to see Gibson producing and winning again. He has massive talent, which most of the others just don’t. Kimmel fawned over Meryl Streep (bletch) and then jabbed at the Trumps once more: “Nice dress, by the way. Is that an Ivanka?” Kimmel quipped. No Jimmy… someone paid Meryl to wear it and she stiffed Chanel for $105,000 on another dress she ordered… I’m sure there’s a joke there. Then he just got gross: “Some of you will get to stand up here and make a speech that the president of the United States will tweet about in all caps during his 5 a.m. bowel movement tomorrow,” he said. Well, that shows the true nature of Kimmel. Gibson was all class and Trump is still the President and doesn’t care about the Oscars. But I’m sure Kimmel will hang on every bathroom break hoping and praying for a joke that might accidentally make him a tiny bit funny and barely relevant.