It’s sad to see the wildfires raging through California at the moment. It’s tragic when people lose life and property to these blazes. It’s even more sad to see how some people are reacting to it. 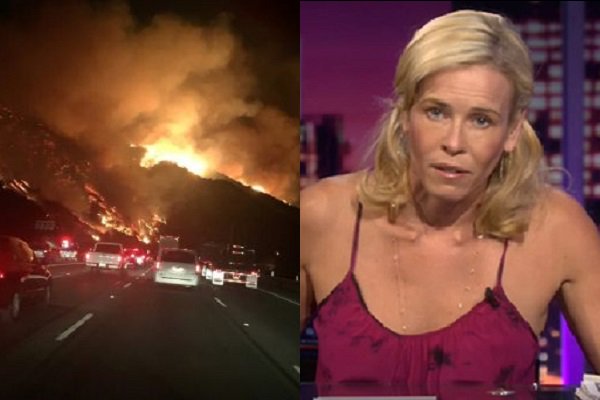 The left has a personality complex. They love government, but only when they are in charge. They need to win elections through coercion, fraud[2], misinformation and the like. Republicans aren’t much better, but at least there is a faction on the right who wants to shrink the size and scope of the government.

President Trump is no God who can control nature. He is just a successful businessman who sometimes says stupid thing and won the presidency on the slogan of “Make America Great Again.” Leftists can’t seem to make up their minds on whether he is a tyrant or if he is powerless in office, but one thing is for sure, it’s not his fault the fires happened in California.

Chelsea Handler is the worst kind of Hollywood celebrity. She’s famous for no reason at all, an awful political comedian hack and as ugly on the inside as she is on the outside. It’s like her soul is rotten and it is destroying her body from the inside out. She’s been under fire recently for what she said[3] about Sarah Huckabee Sanders, Trump’s press secretary.

“That harlot that they’re dressing up and trolloping out every day? I mean, one day she has no makeup on at all, the next she has six-foot-long eyelashes, she’s got cleavage and summer whore lipstick all over her face. Can you believe what they turned her into? A proper trollop.”

She owns a home in Los Angeles and was forced to evacuate it this last week. Surprise, surprise, she blamed the President. “Just evacuated my house. It’s like Donald Trump is setting the world on fire. Literally and figuratively. Stay safe everyone. Dark times.”

Dark times indeed. The media is 100% controlled by leftists and types like Handler and people actually follow and listen to them.

Just evacuated my house. It’s like Donald Trump is setting the world on fire. Literally and figuratively. Stay safe everyone. Dark times.

It seems as if Handler is becoming more unhinged by the day. She is someone who should be ignored at every turn. I wonder how many people actually watch her show. It has to be a very low number. Like CNN low.