Eric Trump and his lovely wife[1] are having their first child… a son. I wrote on it yesterday and congratulated them amid the hate coming from the left. Just evil. Then here comes Chelsea Handler, who is under the delusion that she is somehow funny and that anyone gives a flying crap what she thinks. Here’s her brilliant tweet: “I guess one of @realDonaldTrump‘s sons is expecting a new baby. Just what we need. Another person with those jeans [sic]. Let’s hope for a girl.” First off, too bad, so sad… it’s a boy. Second, the woman can’t even spell. She’s a moron. Her excuse for misspelling ‘genes’ was that she was stoned. She apologized for the misspelling, not for the vile sentiments sent the Trump family way.

Donald Trump Jr. absolutely destroyed Chelsea when she tried to mock the joyful announcement of another addition to the Trump family. He wrote a lengthy Facebook post and savaged Handler and boy, does she deserve it. The impending arrival of a baby, especially the first-born, is an event to celebrate. But Handler scraped the bottom of vileness by making fun of it. She’s a rotten human being and a talentless hack. 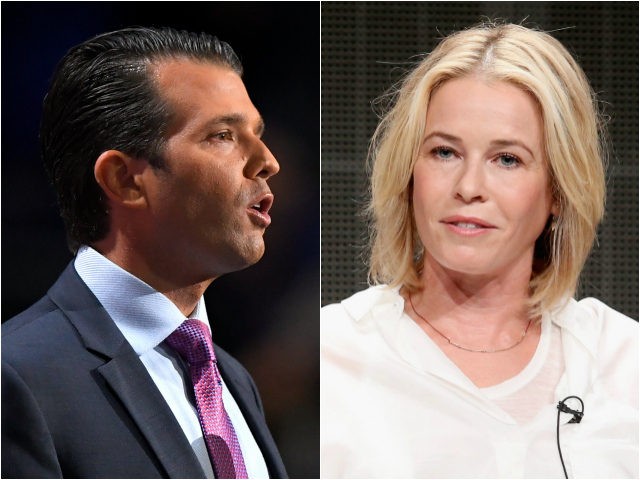 “The liberal elite’s real hatred is hopefully starting to be apparent to mainstream America,” Trump Jr. wrote in a lengthy Facebook message.

On Monday, Eric Trump announced that his wife Lara is pregnant with their first child. Handler responded to the news by tweeting: “I guess one of @realDonaldTrump‘s sons is expecting a new baby. Just what we need. Another person with those jeans [sic]. Let’s hope for a girl.”

I guess one of @realDonaldTrump[3]'s sons is expecting a new baby. Just what we need. Another person with those jeans. Let's hope for a girl.

Handler evidently meant to write “genes,” a point not lost on Trump Jr., who slammed the comic on social media.

“Attacking the announcement of someone’s first pregnancy would seem below the belt to most, but sadly that’s no longer the case,” Trump Jr. wrote on Facebook. ” So much for the party of science.”

My response to @ChelseaHandler[5] and her sick tweet targeted at our family. So much for the "tolerant left! pic.twitter.com/u8MlDZ4lDn[6]

There is no tolerance or charity on the left. They are hatemongers and I have come to believe, evil. Sorry to brand everyone over there that way, but I see it far too often and it is way too common. They are perpetually offended and angry. They really work at it. I’ve watched as they have wished death and worse on the Trump clan. All because they don’t agree with their Marxist stances.

Evidently, Chelsea is a stoner, not very bright and an extremely bitter and vindictive shrew. She’s in the wrong profession. She’s a sick, twisted woman who has no sense of civility or decorum. She needs to slink off into whatever hole she crawled out of.

The Trump’s are a beautiful family and Eric and his wife should celebrate this time as they have their first child. It is a wondrous and beautiful event. Something that someone like Chelsea Handler just can’t understand or appreciate.