I’m a big fan[1] of both Chris Pratt and John Krasinski. Pratt is best known for his role as Andy Dwyer in Parks and Recreation and Krasinski as Jim Halpert in The Office. But this Memorial Day weekend, they put their careers to the side and did a tribute to our military instead. They did The Murph Challenge, which is an epic workout that raises awareness for fallen soldiers. It consists of a one-mile run, 100 pull-ups, 200 push-ups, 300 air squats and a final one-mile run while wearing a 20-lb. body vest. What an awesome way to honor the fallen.

These two men showed deep respect for our warriors this weekend and I’m impressed. The Murph Challenge honors Lt. Michael P. Murphy, a Navy SEAL who gave his life in the line of duty in Afghanistan in 2007. Via The Murph Challenge[2]: “LT. Michael P. Murphy (SEAL) was the officer-in-charge of a four-man SEAL element in support of Operation Red Wings, tasked with finding a key anti-coalition militia commander near Asadabad, Afghanistan. Shortly after inserting into the objective area, the SEALs were spotted by three goat herders who were initially detained and then released. It is believed the goat herders immediately reported the SEALs’ presence to Taliban fighters.” 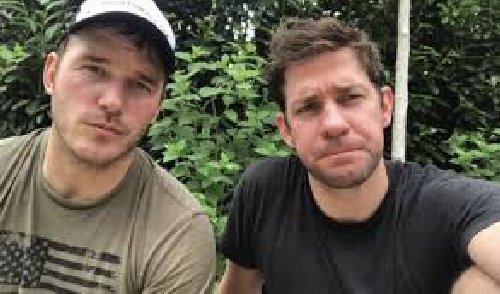 Chris Pratt[5] and John Krasinski[6] are working out for a good cause this Memorial Day.

The actors, who are both in the United Kingdom for the holiday, got together to complete the #MurphChallenge. The exercise routine was created in honor of the late United States Navy SEAL officer Michael P. Murphy, who was awarded the U.S. military’s highest decoration, the Medal of Honor, for his actions during the War in Afghanistan.

Each Memorial Day, gyms across the country perform the workout — a one-mile run, 100 pull-ups, 200 push-ups, 300 air squats and a final one-mile run while wearing a 20-lb. body vest. The challenge raises money and awareness for the LT. Michael P. Murphy Memorial Scholarship Foundation.

“The ‘MURPH’ is more than just a workout, it is a tradition that helps push us, humble us, and dedicate a bit of pain and sweat to honor a man who gave everything he had,” according the foundation’s website[7].

Murphy’s story was told in the epic movie “Lone Survivor,” which relates the ordeal of Marcus Luttrell and his Navy SEAL team in Operation Red Wings. Pratt and Krasinski took to their social media pages post-workout in the UK — sweating and out of breath — to share that they had just done the regimen. I’m proud of them… and so is America.

“It’s a day like today when we commemorate those fallen heroes and say thanks for all you do to make our dreams come true,” Pratt said. The actors said that they were going to order shirts for the foundation now that they’ve “earned it.” Good for them. “So today, whether you do a Murph Challenge or just take some time to say thank you and remember, remember that’s what today is all about,” Krasinski said. Exactly right and well done guys.

#memorialday #murphchallenge @johnkrasinski 1 mile 100 pull-ups 200 push-ups 300 air-squats 1 mile Do it for time. Check out the challenge and get your shirt at https://www.forged.com/ Thank you to all fallen heroes and their families. Today we remember and honor you.

Today we remember and honor each and every one of the brave men and women who gave their lives for us. #memorialday #murphchallenge @prattprattpratt