Way, way, way…[1] over the line. I have never ever thought Stephen Colbert was funny. He’s just not. But now he is being crass for laughs. This is not only deplorable, it is gross. Colbert did a skit taking President Trump to task for calling CBS fake news. Well duh… they are. Truth hurts doesn’t it guys? And you are not helping yourselves with one-liners like this: “The only thing your mouth is good for is being Vladimir Putin’s c*ck holster.” Nice. Bet it took him all afternoon to come up with these witticisms.

Whether there was a ‘canned’ audience or a ‘select’ one – they roared their approval over this disgraceful display of Trump-hatred. This isn’t comedy… it’s a political hit diatribe. Colbert is showing how tough he is and stating what the media thinks of Trump. Keep it up jackass… you’ll lose your viewership of three. Colbert was ripped on Twitter by some of the best out there. Good for them. 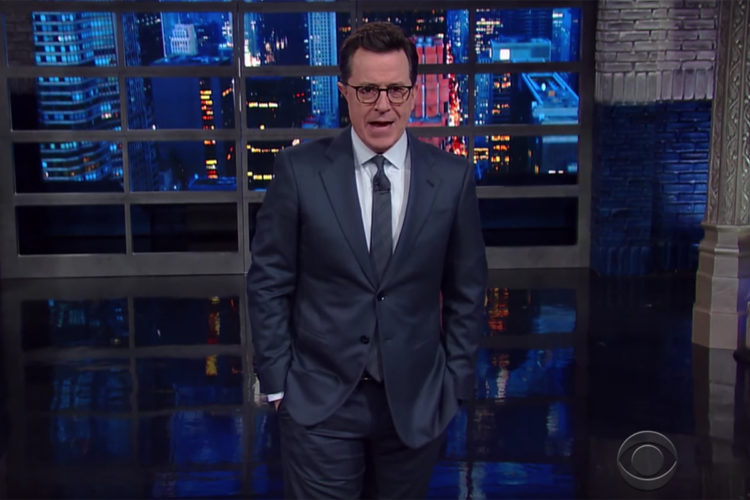 Stephen Colbert isn’t funny and he hasn’t been for a long time.

Don’t believe me? Check out his latest “joke” about Trump starting at the 11:45 mark.

Stephen Colbert to Trump: “The only thing your mouth is good for is being Vladimir Putin’s cock holster.” https://t.co/d5K2k2nH4x[3] pic.twitter.com/3lPliSceTH[4]

Some high profile people on Twitter were all over it.

If Democrats think this type of stuff helps them, it doesn’t. https://t.co/tIQ9QC4bmx[9]

Homophobia for the right cause, with the right targets, is good homophobia, apparently. https://t.co/4rLd1wfTfA[11]

In case you thought the dialogue in our country couldn't get worse – or more crude. This is awful. https://t.co/qSjChQbxVY[13]

You better believe this would never fly if the joke were made about Obama.

This really shows you how low the left has sunk.

This isn’t even close to being funny or brave.

Remember when stand up comedy was bold and it was cool to make jokes that challenged people?

This is just bottom of the barrel low hanging fruit.

If you didn’t think the left could sink any lower, let me enlighten you. This will only get worse as they become emboldened and come more and more unhinged. This wasn’t retaliation for a perceived insult to ‘Face the Nation’s’ ‘John Dickerson. No. This was the truth being said by Hollywood and the media. This is how much they hate the President of the United States.

If any comedian[15] or other talking head had even come halfway close to what Colbert just said about Trump in regards to Barack Obama, they would have been fired immediately and blackballed. The left uses Trump as an excuse to be their horrific selves. Colbert saved the worst for last in his monologue… that’s where he went all out against Trump. Yep, his buds in Hollywood and the media will love him for it and the rest of America will despise him even more. This is what passes for humor on the left. It is vicious, vile and selective. In John Hawkins’ new book, ‘101 Things All Young Adults Should Know’[16], he teaches in number 16 of the book, “Be nice until it’s time to not be nice.” After watching Colbert’s performance here, he should be terminated. It’s time to take the gloves off with the left and say enough over things like this.