Celebrity goes on Megyn Kelly show to talk about celebrity things… and now NBC is in a quiet panic, because the trouble is between two of their stars.

Debra Messing, the redhead in the above photo, was a star on the NBC show Will & Grace, which aired for several seasons, then was cancelled and is now returning, prompting its stars to go on a tour promoting it. The titular character, Will, was a gay man.

Before her show debuted on NBC, Megyn recorded several interviews before making a big score with getting a sit-down with Russian President Vladimir Putin[2] and he was her first interview to be broadcast on the channel. Clearly, whoever is making the bookings here is grasping for whatever will drive audiences to comment, or drive Trump to tweet, which would just result in more publicity. There’s no more news to be had at NBC or from Kelly, so they must simply be booking her as if she’s a generic talk show host and not a heavily politicized figure who should really consider taking her money and retiring.

Now it’s looking like the recklessness of the booking staff has gone sour, because Debra Messing has taken to an Instagrammed photo of cucumbers to rip on Megyn, or “MK” as she refers to her. When a follower asks:

“But why did you guys do the Megyn Kelly show? That’s a fail!!” 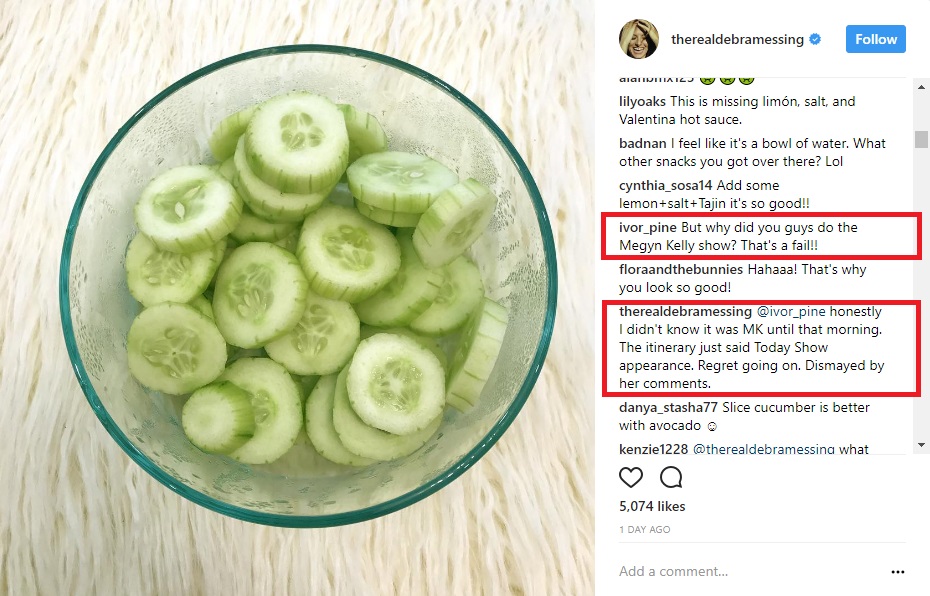 “honestly I didn’t know it was MK until that morning. The itinerary just said Today Show appearance. Regret going on. Dismayed by her comments.”

Kenzie1228 asked: What did [Megyn Kelly] say that was offensive?

Tracy Lennon responded: [Megyn Kelly] asked a super fan/guest if Will “made him gay” and thinks the “gay thing” is going to work out well.”

Reading the flame war back and forth between people talking about what spices to put on cucumber (along with vegans being vegans) is a funny experience. Here are more comments:

DonnaPecci says: You are “dismayed” by her comments??? She was gracious and humorous in the same tone of the entire Will & Grace show! I can’t believe you don’t have more of a backbone than this. To throw someone under the bus just because others have a negative opinion of her is so disappointing to your fans. She was PROMOTING YOUR SHOW!! She talked about how much people love it and the positive impact it has had on the gay community and our culture!! This comment from you is unfair, unjust and maddening. I’m so dismayed.

ElanaCarelloSweaters says: Kelly said ‘you became gay because of Will’. That’s just an ignorant comment, but so in keeping with Megyn ‘White Santa’ Kelly. LOL!

BellasWorld87 says: Really Debra…were you so offended by MK’s comment!? It’s just a bad attempt at a joke. Not having a sense of proportion about a tasteless remark can become more tasteless than the remark itself. Why don’t you just say, “She’s a Republican and she worked at FOX News so I regret coming on.” What a load of crap.

David Eric R says: YESS! You go @therealdebramessing!! They can put her in pastels and make her seem “cute and fun” but @megyntoday the things you have done and said live on tape and you have said DISGUSTING THINGS.

Here’s the full interview, with Megyn Kelly wearing (of all things) a pink pussy bow shirt.