Reality TV star and well-known Christian Josh Duggar is still under fire for admitting to sexual misconduct when he was a 14-year-old boy. Some of that misconduct was purportedly with his own sisters. But now the Duggar parents are claiming that their daughters were never aware that there was any sexual abuse going on. 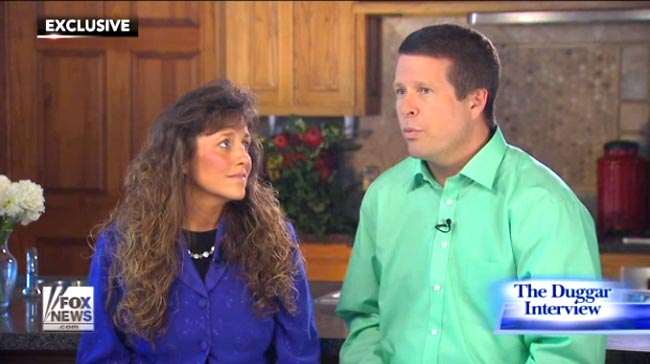 Michelle and Jim Bob Duggar appeared on Fox News’ Megyn Kelly show and said they were “devastated” by the sexual molestation charges leveled against their son, Josh, especially that he had molested some of his sisters.

The parents also say that their son was the one who told them what he did and that after conversations with their daughters found that the girls never even knew it happened[1].

Jim Bob recalled, “He said he was just curious about girls, and he had gone in and basically just touched them over their clothes while they were sleeping.”

Michelle said the fact that Josh confessed to them comforted her.

“I think we had one ray of hope in that Josh had a tender conscience and he was the one that came and shared on his own, even though the others really didn’t know anything of his wrongdoing,” she said.

She said repeatedly that Josh’s sisters were too young to know that what their brother was doing to them was wrong.

“One by one, as we talked with them, none of them were aware of Josh’s wrong doings,” Michelle said. “It was more his heart, his intent. He knew that it was wrong. But they weren’t even aware. They were like, you know, it wasn’t — to them they didn’t probably even understand that it was an improper touch.”

As to his family taking criticism because they are Christians, Jim Bob said that people draw the wrong conclusions from the incident.

Jim Bob said, “I think, you know what, Christianity is not about being perfect or about being a perfect family, but it’s actually about being forgiven….

“People on the outside think, ‘well Christians are supposed to be perfect…’ No, you know what, all of us as Christians we struggle every day.”

Asked if it would hurt them if they lost their TV show, the parents said it would not. Michelle said, “either way, we’re at peace.”