Well, would ya look at that[1]. Kid Rock is now ahead in the polls in Michigan by four points. Time to panic Dems. Robert Ritchie, aka Kid Rock, is at 30 percent in the polls with Debbie Marxist Stabenow trailing him. Fourty-four percent declined in the Delphi Analytica poll to pick a candidate yet. I assume they are waiting for more stances from each party before deciding who to go with. Please let it be Kid Rock. Among those who did state a preference, Kid Rock led by 54 to 46 percent. Let’s see… carry the one, drop the commie… that’s an eight percent lead.

Kid Rock declared his candidacy this month and America cheered for him. I can’t wait to see how this race plays out. Elizabeth Warren and Debbie Stabenow immediately attacked him and Kid Rock immediately ignored them. Heh. Kid Rock campaigned for Mitt Romney and then for President Trump. By all accounts he is a Libertarian, but I’ll bet he’s running on the Republican ticket. He believes in gun rights and Trump… that’s a pretty good start. 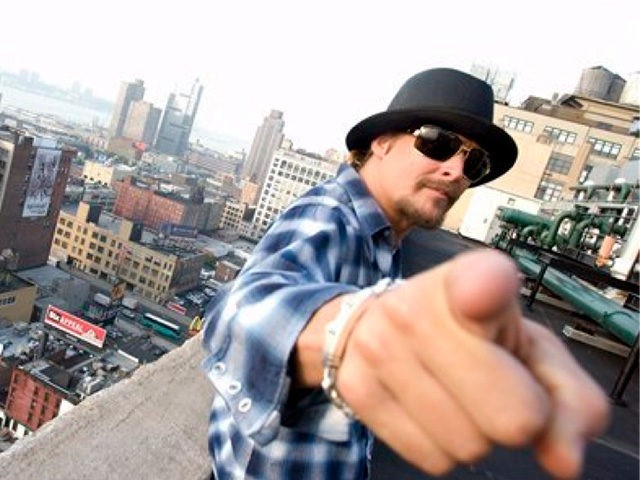 Robert Ritchie, better known to the world as Kid Rock, is leading the 2018 U.S. Senate race in Michigan, according to an early poll released Sunday.

The Delphi Analytica poll puts support for the Trump-supporting[3] Michigan-native entertainer at 30 percent, four points ahead of incumbent Democrat Debbie Stabenow. Forty-four percent of respondents declined to a pick a candidate. Among those who did state a preference, Kid Rock led 54-46 percent.

Kid Rock, whose nearly three-decade career has spanned and melded the rap, rock, and country genres, threw his hat into the 2018 ring[4] this month with a series of posts on social media. Final confirmation appeared to come with a Facebook post including an image implying Kid Rock was completely out of “F***s” to give.

While he initially endorsed fellow Michigander Dr. Ben Carson for president, Kid Rock quickly became an enthusiastic Donald Trump supporter, reprising his 2012 role by playing at the Republican National Convention in Cleveland after Trump accepted the GOP’s nomination for president. He later came under fire[5] for his own pro-Trump apparel brand that sold such irreverent gems as shirts emblazoned with “_onald Trump: The ‘D’ is missing because it’s in every hater’s mouth.”

Kid Rock is also a supporter of everything that is politically incorrect, including the Confederate flag. He’s a staunch supporter of the Second Amendment and is for simplifying healthcare and taxes. He’s a no BS kind of guy. That’s the kind of person we need in office. Can you imagine the meltdown in the Senate if he wins? Talk about stunning beltway politicians… that would be priceless.

The Dems are not taking his run lightly either. “Well, maybe this is all a joke — but we all thought Donald Trump was joking when he rode down the escalator at Trump Tower and announced his campaign, too,” Sen. Elizabeth Warren (D-MA) told supporters in a fundraising email. Kid Rock has 16 months to put this in the bag and I believe he can do it. He’s out ahead and can stay there if he plays it right. And he’s already got the leftists wetting their pants. This should be fun.