Yes, because I crave entertainment[1] from a drug-addled, no talent, vicious liberal like Eminem. He has delusions of grandeur, seeing himself as more popular than President Trump and he indulges in rape fantasies over Sarah Palin and Ann Coulter. Sounds to me like his ‘little friend’ just might be microscopic. I sense adequacy issues. Eminem has a new song out that is despicable and lewd as usual. It’s not even really noteworthy, except to say it is a royal piece of talentless crap that only the most brain dead deviant could find enjoyment in.

He calls Trump a b*tch… nice words from a guy that lacks equipment down under and above. Anything to sell what some consider music. I just find it moronic. Ann Coulter and Sarah Palin are so far out of this guy’s league that all he has left is some warped fantasy that he voices to everyone who will listen. I would construe his lyrics as a threat and take legal action if I were them… but then again, it’s like seeking recourse against an annoying mosquito. 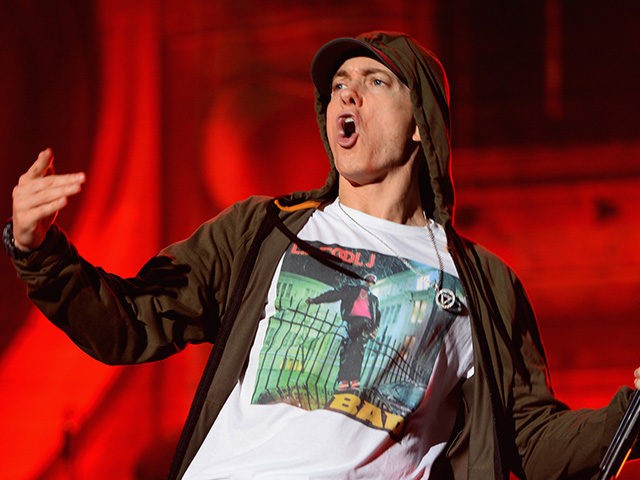 “I’m anti, can’t no government handle a commando. Your man don’t want it, Trump’s A BITCH. I’ll make his whole brand go under,” Eminem says of Trump on the song “No Favors.”

“And fuck Ann Coulter with a Klan poster. With a lamp post, door handle, shutter. A damn bolt cutter, a sandal, a can opener, a candle, rubber. Piano, a flannel, sucker, some hand soap, butter. A banjo and manhole cover,” Eminem raps.

This not the first time that Eminem has used sexually explicit language to attack a conservative woman.

In 2009, Eminem’s filth-spewing lyrics on the song “We Made You” saw the rapper imaging having sex with former Alaska Governor Sarah Palin.

“And I’ll invite Sarah Palin out to dinner then. Nail her, baby, say hello to my little friend!” Eminem raps.

In Emimen’s song that waxed poetic over Palin, he chose a look-a-like for a raunchy sequence in which the scantily clad woman is splayed out on an office desk wearing a skirt and bustier, and Eminem is seen rapping the aforementioned lyrics and dressed as Palin’s husband, Todd Palin. How sick, twisted and perverted is that? He calls it entertainment… I call it deviancy and evil.

He also hearts Black Lives Matter in his new masterpiece: “Go ham donut or go Rambo, gotta make an example of her. That’s for Sandra Bland, ho, and Philando.” Mensa can rest easy… he’s not the droid you are looking for. Big Sean thanked Eminem for his new hit and he recently appeared on New York radio station Hot 97 and fantasized about killing Donald Trump. Wow, these boys have murder and rape on the brain, don’t they? “I know Jay proud of me, he put this ’round my neck. And I might just kill ISIS with the same icepick. That I murder Donald Trump in the same night with,” Big Sean rapped during a freestyle performance.

[email protected][3] No Favors feels like back to back homeruns, you fuckin destroyed this verse! Thank you for blessing the album w/ this! #Detroit[4] pic.twitter.com/QFfLBgbQj3[5]

I would say these thugs should get a life and find a vocation that involved actual talent, but they make millions with this garbage. Consider the source… but remember, this is what the left’s true face looks like.