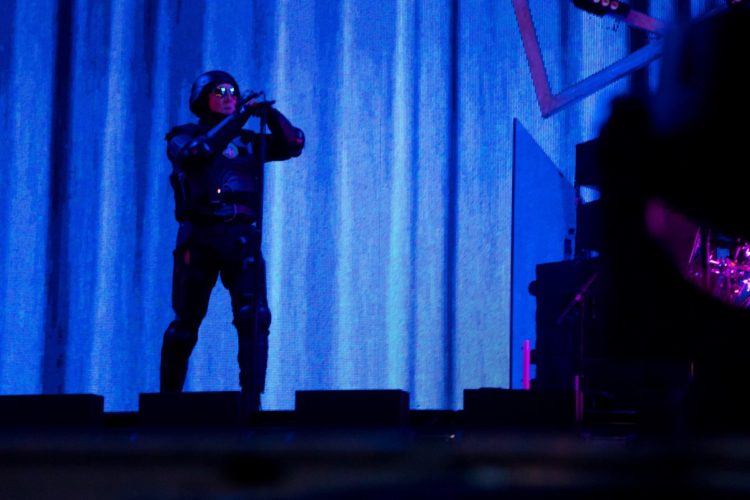 During a Sunday concert on the Memorial Day long weekend, the frontman for the famous 80s rock/metal band Tool, Maynard James Keenan, used his platform to both praise members of the military and law enforcement, as well as to put the “snowflakes” that have dominated headlines in the last few years on blast.

It all started when Keenan, …posted a photo of a rifle to the band’s Facebook page thanking Robert James Miller for his military service with Miller’s information and lyrics to the song “Vicarious” engraved into it. The rifle was a gift from a fan named Nick, who Miller gave his life in order to save. Miller was also the recipient for the Medal of Honor. He explained that “Vicarious” was their favorite Tool song.

The Boston show featured Maynard dressed in what appeared to be riot gear and went on the following rant as reported by The Blaze[3]:

“We have the privilege to do that because of active and former law enforcement and military defending our right to do so,” Keenan — who served in the U.S. Army as a forward observer prior to forming Tool — continued to loud cheering.

“Those of you who are law enforcement and military,” he said, “your job is to defend our right to act like whining, entitled snowflake a**holes.”

He then added a self-deprecating one-liner, “Myself being one.” Even bigger cheers this time — and even some laughter.

Then Keenan turned his attention to “snowflakes” who could hear his voice, explaining how they should treat the military and police.

“Your job is to respect them f***ing doing that for you,” he said. “Divided we fall. Don’t believe the hype, dumb-dumbs, we’re all in this together.”

Maynard was born in Ohio to a Southern Baptist family and joined the Army in 1981, studying at West Point Prep School[4], but declined an appointment there, choosing to take up music instead.

You can watch the full rant below: