During the Global Citizen Concert in New York City on Saturday, legend Stevie Wonder took a knee for America and both knees for prayer for the globe and its leaders. This move shocked and confused a lot of people, who had just gone to the concert to hear some good music. 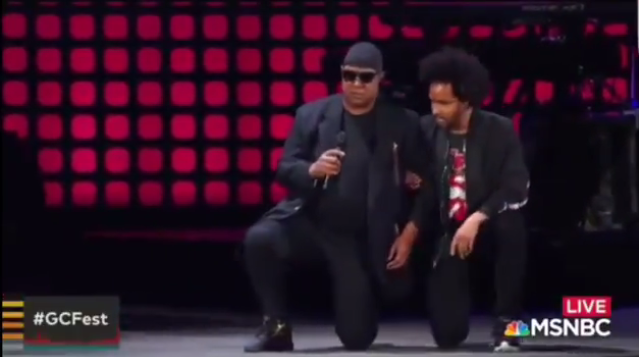 The crowd cheered as Wonder sunk to his knees, claiming prayer for the world.

“Tonight, I’m taking a knee for America,” he said before the beginning of his performance. “But not just one knee. I’m taking both knees. Both knees in prayer for our planet, our future, our leaders of the world, and our globe.”

This came just after Trump’s impassioned refutation of the National Football League, who refuses to punish players for kneeling during the National Anthem and disrespecting the country that gave them the opportunities to be rich and successful.

“We’re proud of our country. We respect our flag,” Trump said. “Wouldn’t you love to see one of these NFL owners, when somebody disrespects our flag, to say get that son of a bitch off the field, right now, out? He’s fired.”

Well, that didn’t exactly inspire people to stand for the anthem. In fact, #TakeAKnee is trending on Twitter, where you can see people from all walks of life, from doctors to military widows, voicing support for people who feel the need to take a knee because of injustices, legitimate or perceived.

What it did inspire was backlash among the NFL, including Commissioner Roger Goodell, who released a statement on the President’s speech.

“Divisive comments like these demonstrate an unfortunate lack of respect for the NFL, our great game and all of our players, and a failure to understand the overwhelming force for good our clubs and players represent in our communities,” he said, demonstrating an unfortunate lack of respect for the American citizens who are appalled that the players could be so blatantly disrespectful to such an amazing country.

Goodell is about to find out that football isn’t the only interesting programming on Sundays.

Perhaps this will prompt parents to turn off the television, sit their kids down and teach them about the history of this wonderful country. We’re not perfect by any means, but I’ll tell you this, people aren’t getting on floating doors to escape our country.