Oh look…[1] another racist radical celebrity pops up. Or sits down as the case may be. Jesse Williams of Grey’s Anatomy fame, decided to sit out the National Anthem at Sunday night’s Big3 celebrity basketball tournament in Los Angeles to protest the violence in Charlottesville, Virginia. Evidently, he thinks all of America is evil because a deranged KKK guy killed a Black Lives Matter protester… who was white and female by the way. I think that Williams is looking for attention and the limelight here, although it isn’t the first time he’s pulled something like this.

He posted a video during the Anthem stating, “We’ll stand when you do.” What an asshat. For his information, if this indeed was a statement against President Trump, he came out against violence on ALL sides. Then he issued another statement specifically singling out white supremacists yesterday. Exactly what is your point? It wouldn’t have mattered what Trump did, this would still be happening. It’s hate and it’s evil… on BOTH sides. Knock it off already before we have a full blown race war in the streets of America. 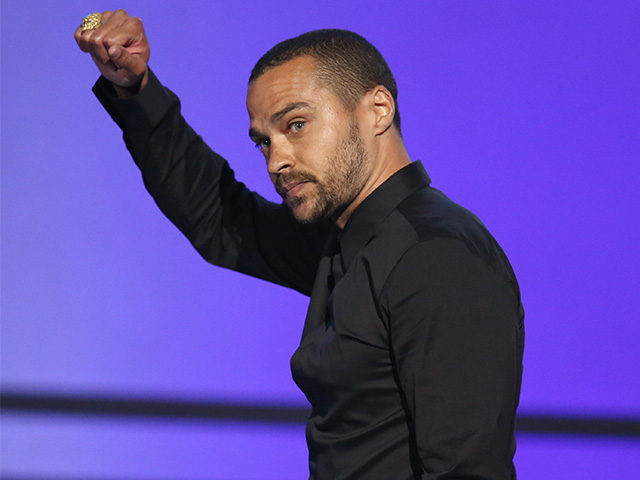 Actor Jesse Williams sat out the National Anthem at the Big3 celebrity basketball tournament in Los Angeles Sunday in apparent protest of the car attack at a political rally in Charlottesville, Virginia, on Saturday.

According to[3] TMZ, the Grey’s Anatomy star was sitting courtside at Staples Center Sunday to take in the Ice Cube-founded tournament when he apparently deliberately remained seated during the singing of the National Anthem.

Williams posted a video during the singing of the anthem along with the caption: “We’ll stand when you do,” a possible reaction to President Donald Trump’s response to the deadly attack at the so-called “Unite the Right” rally in Charlottesville Saturday, in which a driver mowed down[4] a crowd of people, killing one and injuring 19.

Williams wasn’t the only celebrity to sit out the singing of the Anthem this weekend. Oakland Raiders running back Marshawn Lynch[5] and Seattle Seahawks defensive end Michael Bennett[6] both remained seated during the Anthem at their respective preseason NFL games, though it wasn’t entirely clear whether the football players were responding directly to the Charlottesville attacks.

Other celebrities and sports figures are now jumping on this racist bandwagon as well. And both the left with Antifa and Black Lives Matter, and the right with the KKK, the neo-Nazis and the white nationalists are vowing that this is just the beginning. The radical racist fringes now seem to be ginning up a new Civil War in America and it better be stopped and fast.

Williams is a big advocate for Black Lives Matter. He protested the death of Michael Brown in Ferguson, Missouri in 2014 when that all went down. He has criticized President Trump laying blame on him for racial injustice in America previously as well. “He’s a pig who’s trying to make sure that he galvanizes as much fear as possible, particularly against black, brown immigrants, and Muslims,” the 36 year-old actor told TMZ in March. This is the same jerk who used his Humanitarian Award acceptance speech at the BET Awards in June of last year to slam police officers and the “invention called whiteness” for “burying black people out of sight and out of mind.” This led to a petition to boycott ABC and fire the actor from Grey’s Anatomy. It got nearly 30,000 signatures, but had not effect on ABC. Figures.

Radicalism and racism are being embraced now everywhere you look and middle America is caught inbetween. We are on a deadly and disastrous path where we let historical monuments be torn down and stomped on with no repercussions whatsoever. If we are to stop this chaotic spiral, radicals on both sides must be stopped and those such as Williams have to face the consequences of their words and actions at some point.