HA! Whoopi is FUMING Over Trump, Threatens She’ll Do THIS to Him If He Becomes President

The idea of someone becoming president that liberals don’t approve of always makes them angry, and Donald Trump is no difference. The typical threat is that they’ll leave the country if so-and-so is elected, and the latest to threaten this is none other than Whoopi Goldberg. 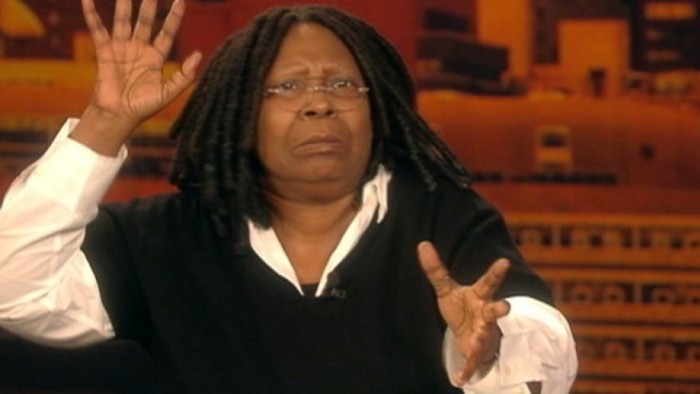 Wednesday on ABC’s “The View,” co-host Whoopi Goldberg said Republican presidential candidate Donald Trump needs to “stop blaming” others for the problems in America and threatened to “move” out of the country.

… Later in the segment, Goldberg continued her rant.

“Listen, he can be whatever party he wants to be,” she said. “What he can’t be is he can’t be the guy that says it’s your fault stuff isn’t working. That’s not the president I want. Find a way to make stuff work. Stop blaming everybody because all of this, as American citizens, this is our — we did all of this. We’ve allowed all this stuff, so we have to fix it. But you can’t say, ‘Oh, you’re Lebanese or you’re black or you’re Mexican or you’re a woman.’ Stop blaming everybody. Let’s fix the crap. Let’s just fix it. If you can fix it, I will listen to what you have to say. The minute you start pointing and saying that person is a rapist and a murderer, it pisses me off because I’ve been part of that when they just use a blanket statement to talk about black people or when they use a blanket statement to talk about white people or women or any other group. I don’t think that’s America. I don’t want it to be America. Maybe it’s time for me to move, you know.”

“I can afford to go,” she added. “I’ve always been an American, and this has always been my country and we’ve always been able to have discussions. And suddenly now it’s turning into, you know, not them, not them. And you know, we have a lot of friends whose parents saw this already. They don’t want to relive this … So I need all the candidates to get it together. Get back to American values.”

Well gosh, how could the United States survive without Whoopi Goldberg? How will we continue on if she leaves the country?! The funny thing is, plenty of celebrities said this exact same thing when George W. Bush was elected president, yet strangely enough, none of them followed through. So is Whoopi going to put her money where her mouth is?