In a classy move that could only come from the mind of a Hollywood elitist Democrat, actress Betty Gilpin (whom?) tweeted out a “patriotic” Independence Day picture from her Netflix show, GLOW.

The photo depicts Gilpin’s character, Debbie Eagan AKA “Liberty Belle,”flipping off the camera. Like the sweet, mentally stable person she is, Gilpin posted the photo to her social media and dedicated it to Republicans. 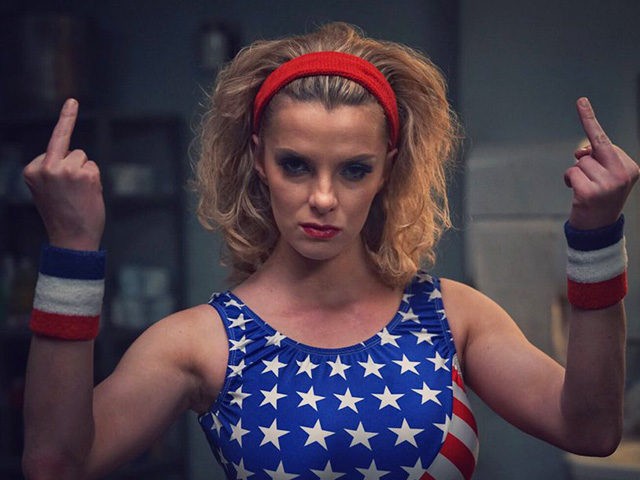 Breitbart[2] gives a little backstory on the show, and why Gilpin was wearing red, white and blue in this picture.

On the new show, set in the world of 1980s female wrestling in Los Angeles, Gilpin plays Debbie Eagan, a soap opera actress-turned-wrestler who goes by the moniker Liberty Belle, a red-white-and-blue-wearing all-American patriot who spars with her nemesis, the evil Zoya the Destroyer (Ruth Wilder) from the Soviet Union.

On July 4th, Gilpin posted the picture with the caption “Liberty Bell wishing the GOP a happy 4th!”

The tweet was quickly deleted after Gilpin realized Republicans weren’t going to lie down and be insulted by some no-name actress who thinks she is informed enough to have political opinions.

She did post a follow up, though. Which, as always, brushes off the justified outrage in favor of a flippant response.

Did it occur to this bubble head that maybe some of her fans and the viewers of her show might be Republicans? Why do these Hollywood weirdos think that it’s good for them to insult an entire half of America simply because their politics don’t line up? Why would you want to ruin your own fame for the sake of being edgy on Twitter? Isn’t the entertainment industry supposed to, you know, entertain? How are you going to lecture us on our politics when you’re just a glorified court jester? Dance monkeys and keep your political leanings to yourself.