In Defense of Jesse Ventura

I AM NOT a fan of Jesse Ventura. I don’t agree with him politically, I don’t like his anti-Americanism (“I will never stand for the national anthem again”) and I REALLY don’t like his wacky conspiracy theories. 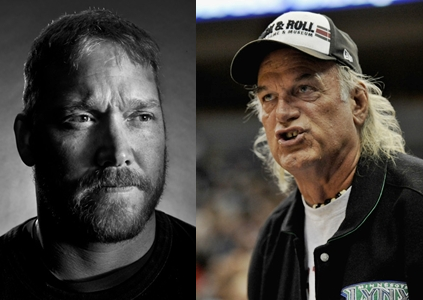 [1]
Moreover, like everyone else, I was appalled to read that Ventura was suing hero-sniper Chris Kyle’s widow.

Why was Ventura suing Kyle’s widow[2]?

Kyle wrote in his 2012 book, “American Sniper,” that he punched out a celebrity while mourning the death of Navy SEAL and future Medal of Honor recipient, Master at Arms 2nd Class Michael Monsoor.

Kyle did not identify Ventura by name in the book, but said that he swung at the individual after he “started running his mouth about the war and everything and anything he could connect to it.” That included President George W. Bush and deployed SEALs, who “were doing the wrong thing, killing men and women and children and murdering,” the man said, according to Kyle’s book. Ventura said the whole episode was fabricated.

Kyle, who was shot to death in 2013 in Texas, alleged that he tried to get the man – identified only as “Mr. Scruff Face” – to keep it down, and he responded by saying the SEALs in the bar “deserve to a lose a few.” The man eventually took a swing at him, Kyle alleged, and all hell broke loose.

“Being level-headed and calm can last only so long,” Kyle said in his book. “I laid him out. Tables flew. Stuff happened. Scruff Face ended up on the floor.”

Kyle later said in media interviews while promoting his book that “Scruff Face” was Ventura, who served in the Navy’s Underwater Demolition Teams during the Vietnam War era. The UDT units were later merged with the modern SEAL teams in the 1980s.

A jury in Minnesota awarded $1.845 million in damages Tuesday to former Minnesota Gov. Jesse Ventura, deciding that he was defamed by the late Navy SEAL sniper Chris Kyle who said he punched Ventura out in a bar in 2006 after the former governor said the SEALs “deserved to lose a few” in war.

…Legal experts had anticipated that it would be a tough case for Ventura to win. But the jury found in his favor 8-2, media reports said. Ventura’s lawyer, David B. Olsen told reporters after the verdict was read that there were no winners in the case.

Proving that Kyle maliciously lied about an incident in a bar in 2006 was tough duty and certainly, the jury wouldn’t have just taken his word for it. Given that it ruled in his favor, I’m inclined to believe that Kyle lied through his teeth to sell books at Ventura’s expense.

Given the slurs that Kyle publicly claimed Ventura launched at his fellow SEALs, $1.845 million in damages wasn’t out of line. Additionally, while it was unfortunate that Ventura had to sue Kyle’s widow, Chris Kyle apparently put BOTH OF THEM in a bad situation by lying to sell books. His wife was stuck defending her husband in an expensive lawsuit and Ventura was forced to either accept a permanent, rather severe slur on his reputation or take Kyle’s widow to court.

Whether you like him or not, if Chris Kyle made up despicable lies about him to sell books, Ventura isn’t the bad guy in this situation.