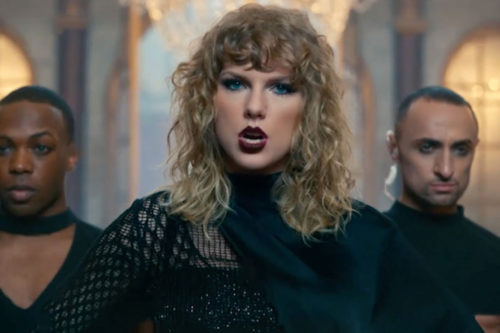 James Corden of the Late Late Show, is here to help. And toward that end he headed on over to the Forum in Los Angeles to give the General Manager there a night off. The venue was hosting the iHeart Radio Jingle Ball that evening. So Corden made his way around the dressing rooms of the various stars who were scheduled to perform. He ran into Sam Smith, Niall Horan, Ed Sheeran, Demi Lovato, Liam Payne and Taylor Swift.

Corden was filming a segment for his show that he calls “Take a Break.” As Corden hilariously walks around the Forum, he barges into the star’s dressing rooms, giving them performing advice, or massages, or random security checks. He yells at people in the hallways to “get down!” and gives the celebrities pep talks to go onstage.

He uses his General Manager badge to swipe into the tour manager’s lounge. While there he grabs a large baguette, slices it down the middle and proceeds to fill it up with every food available on the buffet including what appears to be sauerkraut and chocolate ice cream. With the food dripping out of the sandwich he sits down with the managers and starts taking bites out of it. Some of them start laughing at him.

At one point he learns that Taylor Swift is down one backup dancer and quickly changes into a fishnet shirt and skinny jeans. He starts rehearsing with Swift and her dancers, loudly interjecting whatever he wants into the song. This part is particularly funny as Swift and company try their best to dispatch him.

He critiques the artwork on the walls, in this case rows of fancy toilet seats, and assigns a story to several of them, speculating that this star or that star used this one or that one. And by way of agreeing with Corden…why DO they have toilet seats on the walls at the Forum?

He calls Ed Sheeran “Gingerbread Man” for his code name over the security walkie talkie, eliciting a laugh from Sheeran. The hijinks continue for 14 minutes of video footage and it is well worth watching in its entirety. But don’t take a sip of your drink while you do because you may spit it out all over yourself!

All in all, James Corden helped the General Manager of the LA Forum take a break by messing up as many things as possible while obtaining maximum laughs. If you have 14 minutes, then Corden has some hilarity for you. Do yourself a favor, sit down and have a watch of this silly comedy. Take a break and watch it. But definitely make sure you are sitting down. And if you love seeing stars up close and personal, then this video is for you! Consider it an early Christmas gift.