Actor James Franco has joined with Eliot Michaelson, professor of Philosophy at King’s College in London to discuss the “moral status”[1] of newly conceived fetuses. This is an episode from the duo’s new YouTube series, called Philosophy Time, with Liz Harman, a professor of philosophy at Princeton University in New Jersey. 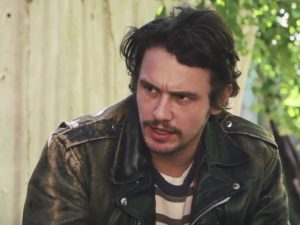 “In some of my work, I defend a liberal position about early abortion. I defend the view that there’s nothing morally bad about early abortion. So a lot of people think, well, it’s permissible to have an abortion but something bad happens when a fetus dies. And I think if a fetus hasn’t ever been conscious, it hasn’t ever had any experiences, and we abort it at that stage that actually nothing morally bad happens,”

So, how exactly does she go about justifying the murder of unborn persons? With a rather calm quack, actually. She goes on with the caveat that the view may seem, “unattractive.”

But what I think is that, actually among early fetuses, there are two very different kinds of beings. So, James, when you were an early fetus, and Eliot, when you were an early fetus, all of us, I think that we already did have moral status then. But we had moral status in virtue of our futures. In virtue of the fact that we were the beginning stages of persons. But some early fetuses will die early in pregnancy either due to abortion or miscarriage. And in my view, that’s a very different kind of entity. That’s something that doesn’t have a future as a person and it doesn’t have moral status.

This is beyond disheartening. Conflating miscarriage with the murder of the fetus is disgusting. One is entirely different from the other. Understandably, Franco and Michaelson were confused about her logic, or lack thereof. “Why would we think that what’s actually going to happen to a fetus in the future is going to make this big difference between having some moral status and not?” Michaelson challenged. Franco says, “can’t you only judge that in hindsight?” Harman then breaks her already bent logic:

What makes “moral status” determine if someone is a human being or not? Either we accept that it is morally wrong to end a human life against its will or we don’t. Nothing I say or do can confer human status upon my spouse, my children, my parents, friends, etc. Why should the unborn be any different? Surely you would believe that a three month-old baby has no “moral status,” but we don’t argue about if it’s alright to murder it. We frequently take “moral status” away from mentally retarded people or mentally ill people. This is just pure tripe from this so called professor. Don’t send your kids to college, send them to trade school.

Check out the rest of the video if you want to see James Franco’s facial expressions get more and more confused.