Oprah Winfrey interviewed Jennifer Lawrence on Wednesday. It’s apparent that she doesn’t like the President, but she probably doesn’t know why. She is as brain dead as any other celebrity coming out of Hollywood. She once said the recent hurricanes are our punishment for voting[1] in Donald Trump. 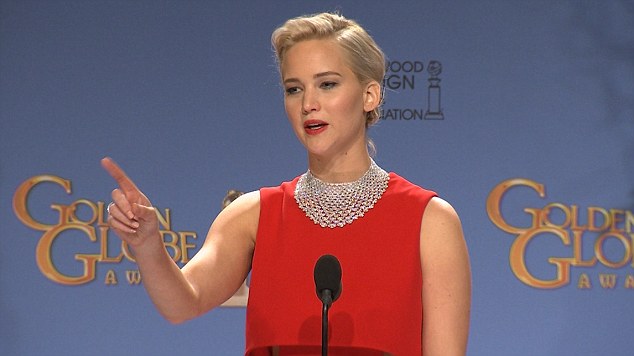 During the interview, the topic of serial rapist/harasser Harvey Weinstein came up. Lawrence said she didn’t “know a woman who hasn’t been touched by some sort of abuse.” That’s probably because she hangs around Hollywood actresses who are getting assaulted by their leftist producers and directors.

“I’m sad by the women’s stories, but I’m excited by the change that’s going to come from it,” she continued.

The conversation then meandered on over to politics and the President. Of course, she is spoon fed what to say by her moronic leftist overlords. Oprah asked her what would happen if she ever met the President to which she responded that she had a “pretty good speech” ready for when she did. Lawrence then said the encounter would “end with a martini to the face.”

“Oh, I would, definitely. Oh, my God, I’ve been waiting for this moment. I’ll give you a hint — it’s not nice. You wouldn’t want me to say it to you.

“I want to travel around to the areas I’m from so that people realize that corruption is a completely nonpartisan issue. And we want to hold a press conference where the only people who are asking the questions are the high schoolers and the college students.

“I would [also] love to help pass a bundle of laws [against government corruption]. We’d be able to pass state-by-state legislation to help [stop] corruption in our government.”

Yeah, I don’t think that’s how the country works. Passing laws to stop government is like posting gun free zone signs somewhere and expecting criminals to not bring guns their. Oh, there is a law about that you say? Ok, in that case I will definitely follow it and not try to sell off America’s future for millions of dollars.

And just high school and college students? What do they know? I was one of those once, I didn’t know jack crap about anything in the world.

She is right about one thing. Government corruption is a non-partisan issue. Power corrupts and absolute power corrupts absolutely. There is so much power centralized in Washington nowadays that only psychopaths and leeches want to get to run to get on the top of the heap.

Donald Trump Jr. had something to say about the interview.

I’m pretty sure that’s not how it would end… https://t.co/tbWEccHlY7[3]

Probably because of the Secret Service, right? A girl can dream, I guess.