Nothing says “I’m serious about changing the political landscape and uncovering corruption” like selling off a chance to get drunk with a fan. Young actress Jennifer Lawrence has decided to do exactly this as a way to raise money for Represent.us[1], an organization that needs money to take the money out of politics.

In her promotional video on YouTube, she announced that she’ll be selling a chance to go on a wine tasting with her and the proceeds will go toward helping fight the corruption in politics (a noble cause, to be sure, but based on her irrational hatred of Trump and not her desire to help the common people have a greater influence in their own political processes). 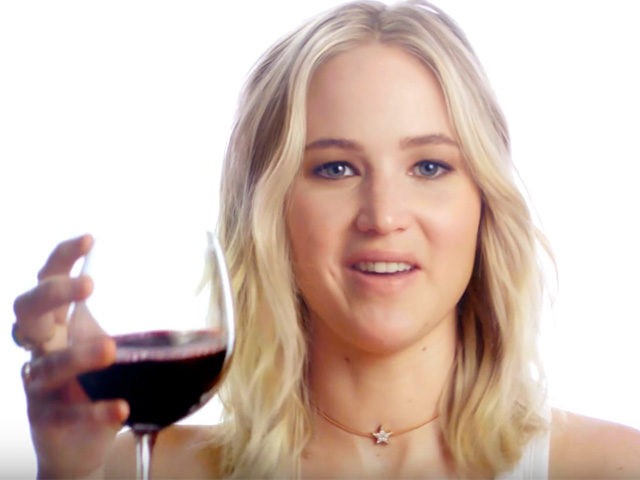 Lawrence is teaming up with contest company Omaze[3] to fulfill this raffle and promotes it in a video published on YouTube in which she desperately attempts to be funny.

“Hey, you. You want to help stop political corruption in America? And drink a ton of wine? Well, you’ve come to the right video.”

Well sure, but not with you. I don’t particularly want to be talked down to by a drunken actress but…

““It’ll be great. We’ll hang out, drink some wine, talk politics, drink wine, maybe we’ll call your ex, maybe we’ll call my ex, who knows? The point is, we’ll have fun. And I know what you’re thinking: ‘Jen, why would I go wine tasting with you? You probably don’t even know the difference between a review of a great wine and a review of one of your movies.’ Well, that’s rude. And weirdly, really specific.””

She proceeds to read reviews that are obviously about wine, but pretend that they are about her breasts. Because attention.

“Full-bodied, strongly grounded, simply sensational. I hope that’s about a Cabernet, and not my breasts. No? Somebody called me full-bodied? It’s a movie review about Joy.”

There are plenty of celebrities whom I would love to go on a wine tasting with and under different circumstances perhaps Lawrence would be one of them. However, I don’t feel like discussing politics with someone who wants to get money out of politics (while ironically belonging to a group of people who give money to political organizations and politicians) is not my idea of a good time.