Jimmy Kimmel BEEFS UP His Armed Security While Pushing For Americans To LOSE Gun Rights! [VIDEO]

This is what I do. I sit at a desk and I report the news for a living. As you can imagine, I don’t exactly make obscene amounts of money. That being the case, I don’t have the money for personal security and armed body guards and if anything were to happen at my house, the nearest cop car is somewhere around 15 minutes away. That is a lifetime when you’re waiting for someone to come save you.

It is for these reasons and numerous others, I and millions of people across the United States own firearms. We train with them, we know our weapons inside and out, and we know everything there is to know about handling them safely. Yet liberals like Jimmy Kimmel think that they have the supreme right to tell us that we should have our Second Amendment rights restricted, while he exercises them daily.

Are you starting to see why people believe that Hollywood lives in a bubble? 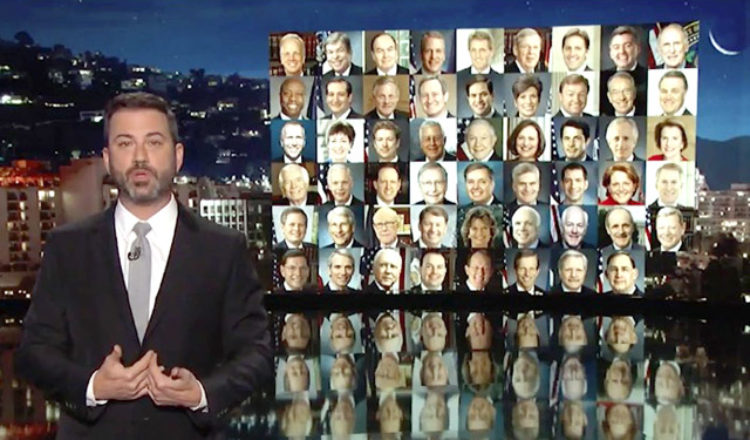 Kimmel has reportedly added more armed guards at his studio because of “protestors,” yet opened his Monday night monologue with an attack on conservatives, gun rights and the Constitution. But we expected nothing less from a Hollywood hypocrite, right?

“The Senate majority leader, Mitch McConnell, the speaker of the House, Paul Ryan, a number of other lawmakers who won’t do anything about this because the NRA has their balls in a money clip, also sent their thoughts and their prayers today — which is good,” he mocked.

His crocodile tears didn’t fool anyone.

From the bottom of our hearts, we are mourning for the people who were killed by this individual, but the answer is not to take more of our rights. The last thing we need to do is to put more people in danger by taking away their ability to defend themselves. The Constitution doesn’t state that we have a right to bear arms “unless something really bad happens and then give them up idk.”

The answer is not to put people in harm’s way, it is to bolster security in places like this. (I mean seriously, it didn’t register with anyone that a man brought so many firearms into his room?)

Stop telling me how I can defend myself when you are surrounded by men with guns at any given time.