I have learned to thoroughly despise Jimmy Kimmel. He is a political opportunist willing to use his ill child or dead Americans as fodder for his political rants. Shame on him. On his program last night, he went into a ten-minute rant on the Mandalay Massacre in Las Vegas, saying “now is the time for political debate” about gun control. No, it isn’t. First off, the dead are not even cold before this asshat and others leftists stood on their corpses to scream for gun control. Second, gun control is never the solution to something like this. I firmly believe this guy was a leftist who had planned this mass murder for a long time. He bought guns in four different states and had explosives in his car and his homes. He rented that strategic room at the Mandalay Bay months in advance. This was political alright, but not about guns… it was probably to take out supporters of President Trump.

Kimmel dismissed what he labeled as inadequate calls for prayers for the victims. The left hates God, but they sure love gun control. He referred to President Donald Trump, House Speaker Paul Ryan and Senate Majority Leader Mitch McConnell (R-KY) and arrogantly stated that “they should be praying for God to forgive them for letting the gun lobby run this country.” What a vile asshat this man is. 59 people are dead, 527 are injured and he just can’t wait to push stripping Americans of their constitutional right to bear arms. I will NEVER watch this simpering fool again. EVER. 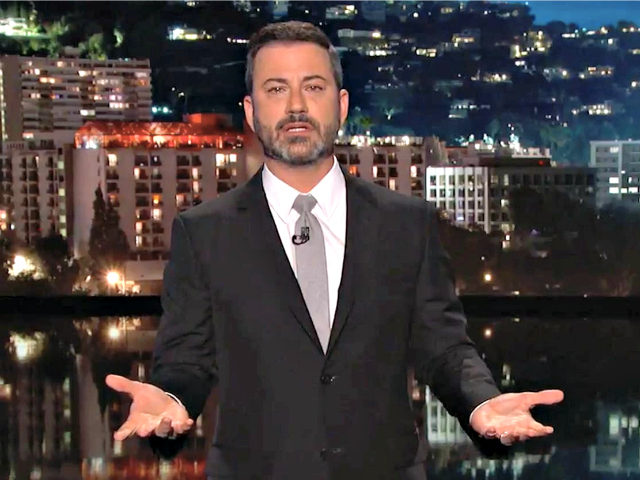 I don’t know which is worse… the insane conspiracy theorists out there or the leftists. Kimmel outrageously accused lawmakers who “won’t do anything about this because the NRA has their balls in a money clip,” insisting that their “thoughts and your prayers are insufficient.” No, your offensive tirade against our rights is insufficient and extremely disrespectful of those who perished. And it is abhorrent that you pounced on that as people were dying, you jackass.

Kimmel spoke out against the LVPD who said there was no way they could have stopped the mass murder, which is of course true. “I disagree with that intensely,” Kimmel said, “because of course there’s something we can do about it. There are a lot of things we could do about it. But we don’t,” he continued, “which is interesting because when someone with a beard attacks us, we tap phones, we invoke travel bans, we build walls, we take every possible precaution to make sure it doesn’t happen again. But when an American buys a gun and kills other Americans, then there’s nothing we can do about that.” Well, the left could stop inciting their own to violence, there’s a thought.

Kimmel may have lived in Vegas for years, but so did I. I lived there for 20 years, so that buys him squat. He was also callous toward White House Press Secretary Sarah Sanders’ plea that “this is not the time for political debate.” He said, “I don’t know, we have 59 innocent people dead. It wasn’t their time either, so I think now is the time for political debate.” Again, there is no debating a communist, which Kimmel is. He doesn’t give a flying crap about those who died and he shows it.

Kimmel threw all kinds of false allegations at President Trump and the NRA. He pointed to mental illness and guns, but Paddock was never diagnosed as mentally ill. He ranted about the supposed “gun show loophole,” a common anti-gun lobby characterization of the fact that law-abiding Americans are allowed, in the vast majority of states, to sell and purchase guns among one another without using a gun dealer. “There are loopholes in the law that let people avoid background checks if they buy privately from another party, if they buy a gun online, or at a gun show,” Kimmel claims, showing the pictures of US Senators who voted against a resoundingly defeated 2016 bill that would have banned most interpersonal transfers of guns in the United States and saying, “These are the 56 senators that didn’t want to anything about that.”

Then Kimmel went for the specious polls out there that are heavily weighted in favor of the left and against the Second Amendment. Again, he went for background checks and withholding weapons from the mentally ill, which in the end, will be used to take guns away from everyone. The killer in Vegas bought his weapons at gun stores in at least four states: California (the majority of the weapons), Arizona, Utah and Nevada. Kimmel also picked up the evil mantle from Hillary Clinton and railed against sound suppressors. “I want this to be a comedy show, I hate talking about stuff like this,” Kimmel pleaded to his audience, becoming visibly upset. “… What I’m talking about isn’t gun control, it’s about common sense.” No, it’s a Marxist political agenda and we all just wish you’d shut up about it.

As an afterthought, he asked his viewers to help in Puerto Rico. He only did that because of the Trump-hating leftist mayor of San Juan. Kimmel is transparently hateful. Notice he didn’t request help for those families of the victims in Vegas. Telling.