Joy Behar: Trump Needs to be REMOVED FROM OFFICE! [VIDEO]

Joy Behar loved everything that Obama did…[1] when he let our enemies step all over us, she thought that was great. Trump has at least taken a fairly tough stance on North Korea. He says we will deal with them, whether the Chinese help us or not. For that and because he is keeping all options on the table, she is calling him crazy and demanding that he be taken out of office. Behar wants him impeached. She used a hodge podge of his comments taken out of context to make her point. The View and their audience are unhinged when it comes to President Trump. Frankly, I don’t know how they are still on the air.

I find it ironic how adamant Behar is over removing Trump, when it was Obama that pretty much destroyed this country. During eight years of unconstitutional moves by Obama, she said nothing about it. But because Trump stands up to one of our biggest enemies… she throws a tantrum. She must have missed that Rex Tillerson just warned Russia over Crimea. That he also warned the North Koreans over their missile launches and nuclear tests. These harpies tried to hang it all on Nikki Haley – which is the wrong target first off and brazenly stupid to boot. China controls a lot of what North Korea does. We cannot afford to let them do as they please, seize countries and take over territories. If we do, we will certainly have war. 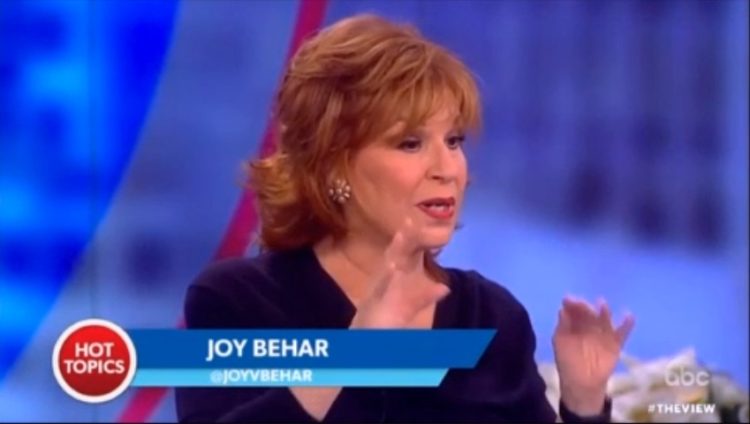 During a segment talking about Russia, North Korea, and Trump’s relationship with these countries on The View Monday, host Joy Behar threw a temper tantrum, calling on the president to be impeached. After reading out-of-context quotes from Trump about using nukes, Behar couldn’t contain her rage any longer and demanded that Trump be “taken out of office,” to roaring applause from the liberal audience.

The segment began by talking about Nikki Haley’s weekend appearance on ABC where she was grilled by[4] Martha Raddatz about Trump and Russia. Host Whoopi Goldberg said she was “freaked out” by Trump staying out of the fray when it comes to Russia, and North Korea. Whoopi questioned, “Isn’t somebody supposed to be in charge?”

Behar then shared her own worries about Trump’s past statements on nuclear warfare:

BEHAR: The thing about Trump is, the things he has said seriously about nuclear weapons is quite frightening. I’ll give you a couple. To Chris Matthews, he asked, “Why do we make them, he said, if we wouldn’t use them?” Ok. The possibility of nuclear war between Japan and North Korea: “It would be a terrible thing. If they do, they do.” Good luck. Enjoy yourselves, folks. He said he was open to nuking Europe because “it’s a big place.”

Trump should go after Obama. The Obama administration had surveillance on Trump and his associates in place for a year before Trump was elected. Obama and his minions broke the law in a number of ways. Trump is quite aware of what is going on with our enemies and Rex Tillerson is on it as well. As for Jared Kushner, I have my doubts there too, but I am not the President. Instead of second guessing the Commander-in-Chief and the Secretary of State because you don’t like their political stances, why don’t you suggest real solutions to all this? After all, it was the left who screwed it up in the first place.

For the women there claiming how dangerous Trump’s words are to our enemies… you know what is even more dangerous? Doing freaking nothing and being silent. Peace through strength is the only thing that works on the geopolitical front and these sea hags would know that if they had any brain matter at all upstairs. The only nuts I see here are on The View.