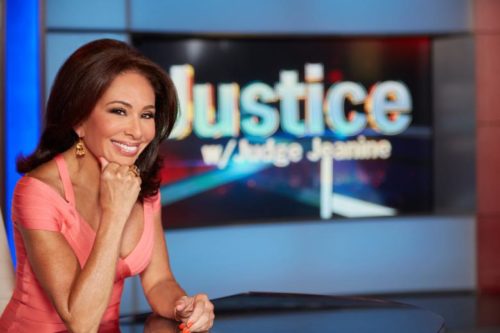 Judge Jeannine Pirro[2] isn’t known for her subtlety. And this past Saturday’s opening statement on her ‘Justice’ show that airs on Fox, is no exception. She let the crybaby students on America’s college campuses have it.

In no uncertain terms, she gave them a dressing down as she called them out for their thuggish, criminal ways and their ridiculous belief that they shouldn’t have to hear opposing points of view.

Recently, Conservative commentator Ann Coulter was invited to speak at UC Berkeley by the College Republicans club. That UC Berkeley even has a College Republicans club is a glimmer of hope. But nonetheless, her speech was cancelled due to “safety concerns.” Right. Meaning their own students are thugs and vandals and making it unsafe. Does this school have control of its campus or not? Safety is their job. And if it isn’t safe, it’s because they aren’t doing their jobs. Coulter will likely still speak, as she is not backing down. And she is calling them out on their attempt to silence the free speech rights of the College Republicans.

Pirro goes on to address the wuss factor of today’s college students and the wuss factor of campus police who did nothing of any merit to stop the rioters and vandals when Milo was scheduled to speak. In essence, she accuses these police of being complicit in enabling these thugs to destroy and intimidate others, simply because they don’t like their perspective. Where are the parents of these thugs?

The Judge has it exactly right, as usual. America is sick and tired of immature petulant campus crybabies. It’s time to grow up and study up on the Constitution. As Pirro said, they don’t have the right to intimidate and harass others into not speaking freely. And quite frankly, these intolerant students are an embarrassment to our nation.

In John Hawkins’ new book ‘101 Things All Young Adults Should Know’, he teaches in chapter 10 that “People are what they are and probably are not going to change much once they reach adulthood.” It’s not looking good for the future of these college snowflakes. Get a copy today for a young person you know!