Females have been exploited by Hollywood for as long as the industry has been around and there are people who are perfectly comfortable covering it up and considering it “business as usual.”

Fox News host Judge Jeanine Pirro has no problem calling out their disgusting behavior out and making her thoughts on it public.

We all know that a lot of women have “slept their way to the top” so that they could pursue their dreams of acting and singing, but the fact that they feel compelled to do so is sad.

(And there are men out there who actually think that this is the women’s fault, but has YOUR gender ever been forced to choose between doing what you love and being blacklisted because someone wanted to take advantage of you? I didn’t think so.) 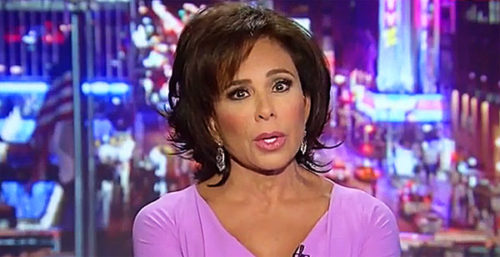 In her opening statement, Pirro attacked Hollywood’s history of covering up sexual crimes against women.

“Another intersection of crime, money, power, and the Democrat party,” she noted, speaking of not only the Harvey Weinstein case, but those in Hollywood who take advantage of women as if they are property.

“As the curtain goes up on the casting couch, aka the casting bed, the town that glorifies violence, murder, and rape is the same town where centuries-old rules of women sleeping for a job is kept quiet,” she said.

It’s odd (and by odd I mean completely and unacceptably hypocritical) that Hollywood claims to support “women’s rights” while simultaneously making sure to take advantage of them simply because she wants to do a job. I’m sure if women were forced to trade sexual favors for jobs in STEM fields, feminists and women’s studies majors would be all over it, claiming that it’s part of “rape culture” and whatnot. But because this type of abuse is taking place in an industry that supports abortion and other things liberals pretend women care about, you will notice feminists being uncharacteristically silent.

Perhaps if there were more REAL feminists in Hollywood and not these posers in pink hats, we wouldn’t have to have this conversation in 2017. Perhaps if there were women who actually cared about things like protecting victims, instead of just inventing ways that every female is a victim of one thing or another, we wouldn’t be forced to uncover the rat’s nest under the rug of entertainment.

This is what the REAL rape culture looks like; it’s wrapped in silken robes and calls itself entertainment.