Kathy Griffin held a press conference to address the shock photos of her holding a mock-up of Donald Trump’s beheaded noggin. If you thought it was going to be anything like the relatively contrite apology video she posted on Twitter a few days ago, you’d be wrong.

In fact, somehow between the time the photos were posted by TMZ and today, she managed to delude herself into thinking that she is the victim of this whole thing.

Just when you almost wanted to forgive her, she goes back to her liberal progressive roots and pulls out every card she can to avoid taking responsibility for her actions. 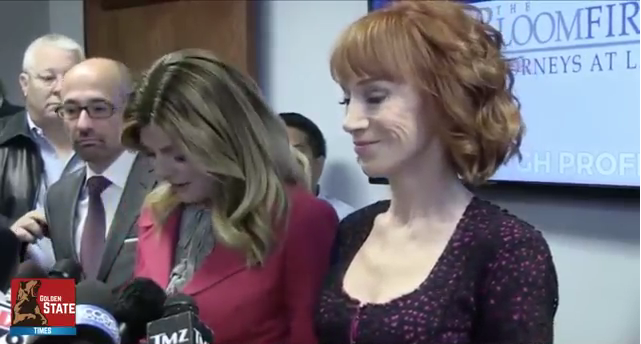 Griffin’s attorney, Lisa Bloom, (if you don’t know who she is, Google her) attempted to justify the photos as “edgy art” and “a depiction of Trump’s own sexist words.”

Griffin also laments the loss of her career at the hands of Trump:

“I don’t think I will have a career after this. I’m going to be honest, he broke me.”

“If you don’t stand up, you get run over. What’s happening to me has never happened ever in the history of this great country. Which is that a sitting president of the United States and his grown children and the First Lady are personally, I feel, personally trying to ruin my life forever.”

“He picked me, I’m the easiest target.”

He “picked” you? You literally sent his son into a panic with your disgusting photos. You pretended to have beheaded him and were seemingly proud of doing so. You brought this on yourself, but you think he “picked” you because you’re an easy target? How tone-deaf can you be?

Oh, and just when you thought she couldn’t be anymore ridiculous, she pulls out all the stops and blames “white men” and “sexism” for the backlash to her stunt.

“It’s a bunch of white guys trying to silence me. This wouldn’t be happening to a guy. This is a woman thing.”

Watch the video below. The conference begins at the 40:22 mark:

What do you think of this conference? Do you think she is sorry at all for what she’s done?