Kathy Griffin is like a case of oral herpes. She doesn’t always pop up, but when she does, she’s annoying, unsightly, problematic and a pain to get rid of. If she were to fade into obscurity, I honestly wouldn’t have any complaints. Every time she opens her mouth, a waterfall of inane word vomit falls out and grates against my eardrums like sandpaper.

She’s back to blaming Trump for her stupid decision to pose with a mock up of his severed head and the resulting backlash. She likes to do this about once a month to remind us that she’s still alive and is desperate for payed work. Why she feels the need to resurrect the one issue that was ultimately her professional downfall, I don’t know. It seems to me that if you’re trying to get back on your feet, you would want to put that particular event as far behind you as possible, but what would I know? 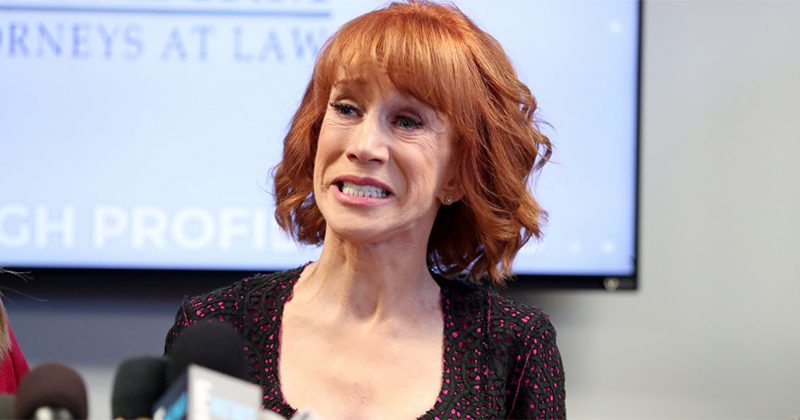 Griffin agreed to an interview with Politico, where she once again blamed Trump for putting her out of work. She believes that he didn’t have to respond to her in a tweet, which she thinks was what really did her in.

“I think it would have been gone in a week without his tweet,” she said. “Trump knows what would be perceived as something hysterical and he loves hysteria. There are millions of people who think I’m a member of ISIS to this day.”

I’m not saying that Griffin is a member of ISIS, all I’m saying is that there is only one group of people on the planet who pose with severed heads and it’s not the Jehovah’s Witnesses.

She is also claiming that she can’t do any public gigs in the United States because she’s afraid of being attacked.

“They were thrilled to have someone come over and make fun of Trump,” she claimed. “I wish I could tour in the U.S. without getting shot — I know I can’t. I was in the middle of a 50-city tour when the tweet happened. It was canceled in 24 hours.”

Griffin initially apologized for the photo and said that she had gone “too far” by allowing herself to participate in such a terrible image. Over the next few months, however, she seemed to take the opposite approach, blaming everyone but herself for her terrible luck. Trump was, naturally, the target of her anger. She actually believes that if he had not responded to her photo, it would have blown over and she would still have a job.

Yes, she actually believes that the average American is that stupid.

Of course, she also thinks that she should have been able to get away with something that would cost most of us our jobs. Think about what would happen to you if you did the same thing, would you lose your job? Yes? So, why is she any different?