Kid Rock Just Released His First Campaign Message – It’s A Good One, Challengers Should Be Worried 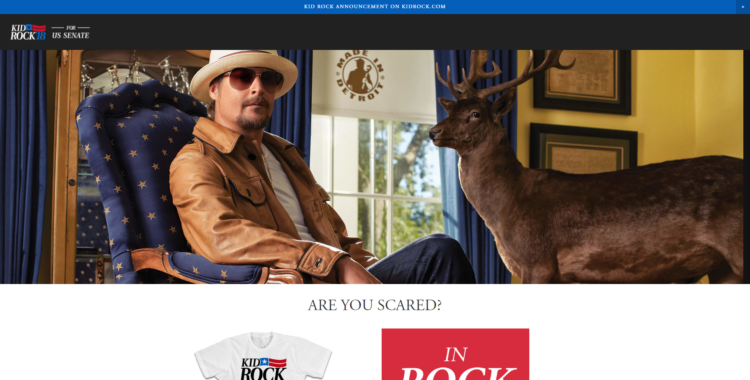 In the past few days we’ve been seeing the early rumors and then the confirmation that musician Kid Rock will be running for Senate in November and he’s hitting the ground running. He made headlines last week as we dug into his pro-Second Amendment history and now he’s starting to tweet out the basis of his platform. On Monday, he started the week by posting this:

“I believe if you work your butt off and pay taxes, you should be able to easily understand and navigate the laws, tax codes, health care and anything else the government puts in place that affects us all.”

Clicking through to his website, KidRockForSenate.com[5], you’ll see there isn’t much except some photos, t-shirts and a scrolling .gif of slogans like “Pimp of the Nation,” “Born Free,” “Welcome to the Party,” “I’ll Rock The Party,” “You Never Met a Politician Quite Like Me,” “Get in the Senate and Try to Help Someone,” “In Rock We Trust” and “Party to the People.”

I’ll point out that his shop website has a website address that links to Warner Bros. Records (http://kidrock.warnerbrosrecords.com/senate.html[6],) because he seems to be using the same online store for his musical career as he is using for his Senate race.

Kid Rock lives in Detroit, Michigan and back in December of 2016, we at Right Wing News reported on his new patriotic, pro-Trump clothing line[7].

Kid Rock has come out with a new clothing line endorsing President-elect, Donald Trump. And it is very… interesting. And more than mildly offensive. Using profanity, it endorses Trump supporters and profanely puts down states that voted for Hillary R. Clinton.

In a statement, he said:

“Due to overwhelming demand, we decided to go ahead and actually make this & other current event merch,” the Michigan native tweeted on Monday, introducing a collection that includes a handful of products that some people would find highly offensive. One shirt boasts the slogan “Gods, Guns, and Trump,” a phrase that’s already adorning other merch sold on websites including Amazon. Another, which the singer donned for a recent concert, shows a map of the United States and highlights the states that voted for Hillary Clinton in blue and the states that voted for Trump in red, calling the blue states “DumbF***istan.”

With an early prelude like that… everyone will be watching to see which way he’ll turn next (and which P.R. firm he fires to help him craft a more radio friendly message).