Leonardo DiCaprio: Only The People Who Believe In Science Should Hold Public Office

Leonardo DiCaprio would have fit right in during the Inquisition. He basically believes that if you don’t believe in climate change, you are a moron and not fit to live. Now, he’s saying that anyone who wants to hold public office should only be allowed to if they believe in ‘science’. Of course, this caused massive upset on Twitter and people demanded to know exactly what kind of ‘science’ he meant. But we all know it’s climate change. That’s his shtick.

And boy, is this arrogant asshat ticked at President Trump. While speaking at Yale University last week, he ripped into Trump and vilified him for pulling out of the Paris Climate Accord. DiCaprio was quoted as saying, “We are going to look back at this point in history, and frankly this administration, and certain people are going to be vilified for not taking action. We should not have people in office who do not believe in facts and truths and modern science that are able to manipulate and risk the entire future of this entire generation.” 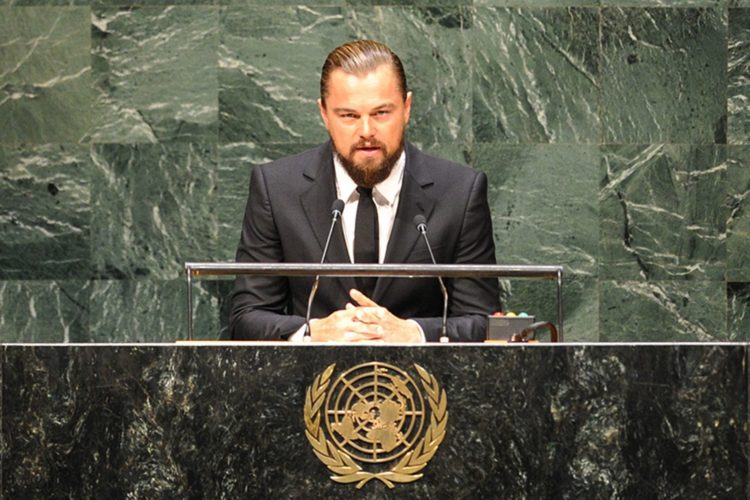 DiCaprio is a huge progressive liberal… he’s a Marxist. He claims to “believe in facts and truths and modern science” and that means believing that humans are destroying the planet and that climate change and global warming are the most dire issues of our lifetime. He’s a moron. But his science is selective… he doesn’t believe after all that life begins at conception. Or that there are only two biological genders. For that, he got royally nailed on Twitter. I might add that his statement is hauntingly reminiscent of a religious litmus test, something that is making a comeback on the left with communists like Diane Feinstein.

DiCaprio and Nye both treat climate change as a religion. I would not be surprised to find them worshiping Gaia. Leonardo seems to also have a problem separating fantasy from reality. Starring in Titanic does not make you an expert on climate change, which is a fake science intended to control others and make a ton of money. At one point during the Yale speech, John Kerry held up a vial of air from the South Pole — “the cleanest air on earth,” he called it — at which DiCaprio joked, “Let me get a hit of that,” drawing laughter from the 2,500 in attendance. I think I’m going to be ill. Tell you what, why don’t we send these two to the South Pole and they can get high on all the clean air they want while they freeze.

OK, let’s start with with the science of conception. https://t.co/wVIDV04NhW[2]

DiCaprio admitted to being obsessed with climate change. “We just broke three records in the last couple weeks: Irma, the most high-velocity cyclonic effect in a hurricane, winds over 185 miles per hour for over 24 hours; Harvey, the greatest amount of rainfall in history in one storm; and then the fires that are decimating the western part of the country,” Kerry said. “The evidence is overwhelming.” No, you idiot… that’s called nature and cyclical weather. One thing is clear, DiCaprio and Kerry both hate Trump and Pruitt, who heads up the EPA. That’s okay, we hate DiCaprio and Kerry right back. God save us from sanctimonious celebrities and wind bag elitists.

Great. Let's start with everyone who doesn't think a fetus is human or that there are only two genders. https://t.co/DVWLEZ01wD[4]

So, those that see gender scientifically (biological) and not “relative” to ones feelings shouldn’t be allowed to hold public office? https://t.co/VieMIjHsBt[6]

Someone should ask Leo when life begins and how many sexes there are! #PartyOfScience[8]

Biology is a science. So lets start with the people who think men and women are biologically the same and that it's okay to kill babies. https://t.co/RR10bf2cYt[10]

"Believe in science" is a theological construction. https://t.co/mrKfBposXJ[15]

"Believe in science" is a theological construction. https://t.co/mrKfBposXJ[15]

For the umpteenth time: you don't "believe" in science. Science is a method which produces theories that change when new data is discovered. https://t.co/UIKcRtcS9g[17]