It seems like artist Eminem really wants a beef with the President and Trump isn’t giving him the attention that he craves.

Now he’s upped the rhetoric from a poorly written diss track to calling Trump “Aryan” and making seriously inappropriate comments about Ivanka Trump. No doubt he believes that this will spark a reaction from the President. Is his career really doing that poorly that he needs to fight with a 70 year-old man on social media to stay relevant? I mean really. 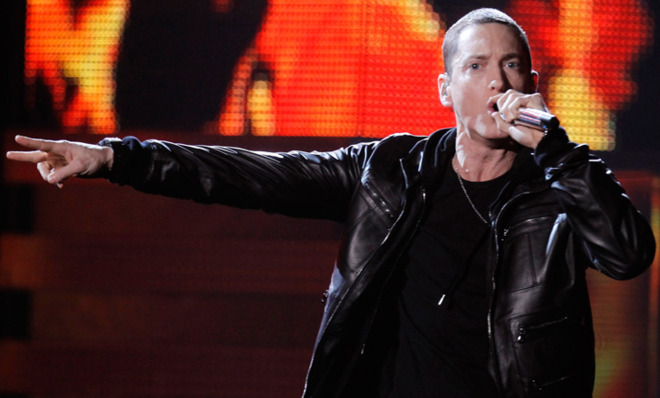 Eminem wrote yet another song about Trump, this one featuring artist Alicia Keys, entitled “Like Home.” Some of the lyrics read as follows:

“Someone get this Aryan a sheet
Time to bury him, so tell him to prepare to get impeached
Everybody on your feet
This is where terrorism and heroism meets, square up in the streets
This chump barely even sleeps
All he does is watch Fox News like a parrot and repeats
While he looks like a canary with a beak
Why you think banned transgenders from the military with a tweet?
He’s tryin’ to divide us
This shit’s like a cult, but like Johnny, he’ll only unite us.”

In another song “Framed” he fantasizes about kidnapping Ivanka Trump.

“Donald Duck’s on as the Tonka Truck in the yard
But dog how the fuck is Ivanka Trump in the trunk of my car
Gotta get to the bottom of it to try to solve it
Must go above and beyond, ’cause it’s incumbent upon
Me, ’cause I feel somewhat responsible for the dumb little blonde girl
That motherfuckin’ baton twirler that got dumped in the pond”

His lyrics are really going downhill, in my opinion. I love his older stuff, but lately it’s like we get it, dude. You don’t like Trump. How many albums is that shtick really going to sell though?

In a collaboration with Big Sean, Eminem goes on to rap about sexually assaulting Ann Coulter.

“And fuck Ann Coulter with a Klan poster. With a lamp post, door handle, shutter. A damn bolt cutter, a sandal, a can opener, a candle, rubber. Piano, a flannel, sucker, some hand soap, butter. A banjo and manhole cover,” read the lyrics.

This is just sad. He has had a wildly successful career due to his ability to strike a chord in people who don’t really feel like they belong in society, but now he’s being intentionally divisive to sell records. He’s a puppet for the Democrats and doesn’t even know it. Maybe he’s rapping about things he really believes, but it’s highly unlikely he cares about any of these things, especially given the fact that he has repeatedly spoken ill of women, the LGBT community and other groups that liberals hold dear. This is not someone they want to hold up as a leader of the “resistance.”