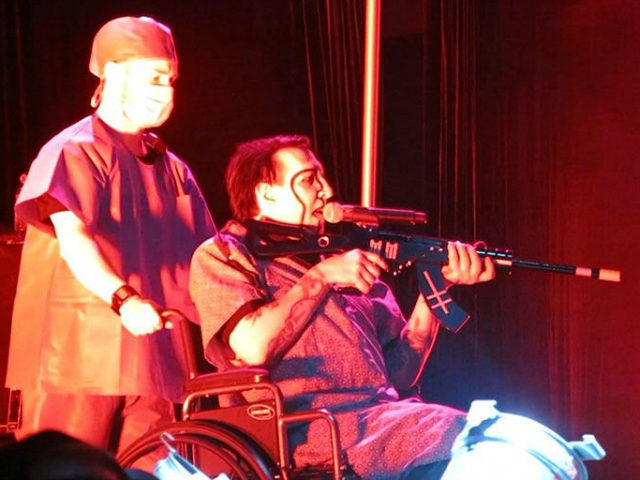 Wheeling on stage on Sunday night, aging rocker Marilyn Manson pointed a fake rifle at people attending his concert in San Bernardino, California. If you recall, that’s where two Muslim terrorists murdered 14 people attending a Christmas party back in 2015.

Manson, whose Christian name is Brian Hugh Warner, once married burlesque star Dita Von Teese who proceeded to file for a divorce 13 months later after she found out that he was having an affair with a 19 year-old woman who was acting in one of his music videos. Even if you haven’t listened to that newfangled noise on the radio since 1992, you may have watched Manson appear in Michael Moore’s Bowling for Columbine documentary where he spoke about the fact that the two killers were fans of his.

“The two by-products of that whole tragedy were, uh… violence in entertainment and gun control. And how perfect that that was the two things that we were gonna talk about with the upcoming election. And also, then we forgot about Monica Lewinsky and we forgot about… The president was shooting bombs overseas, yet I’m a bad guy because I sing some rock’n’roll songs. And who’s a bigger influence, the president or Marilyn Manson? I’d like to think me, but I’m gonna go with the president.“

The fake rifle that he took on stage with him on Sunday, November 5th, looked like an AR-15 and… and… I’m sorry, but he’s not holding that thing right, if it were real he’d just bruise or break his shoulder.

Manson pointed a gun at us all last night and screamed “We know where you fucking live.” Very spooky. So glad I finally got to see them.[2]

But, just two months ago, Manson gave an interview saying that he was mad that his album was being censored, making it harder for kids to buy it. So your audience is all underage? He goes on to make a bizarre statement about where kids should be spending their money:

“Give them the money and let them make their own choice: guns or records. If [the Columbine killers] had just bought my records, they would be better off. Certain people blame me for the shootings at schools – I think my numbers are low, and hopefully they go up on this record.“

Did he just say that if more people buy his albums, that more school shootings will occur? Is that supposed to be an endorsement?

After the Las Vegas Massacre, we wrote up Marilyn Manson as one of many liberals who had called for violence in the past. Last year, before the election, he put out a music video for his song SAY10 where he ripped pages out of the Bible and decapitates a man with a clear resemblance to Donald Trump[4], with his trademark red tie and dark navy suit. Oh, you threw a Bible on the ground and tore pages out of it? So edgy. So very edgy. Dude, you’re almost 50 and you’re still making edgy music videos?

Maybe pay more attention to Alice Cooper who had positive things to say about Trump back in 2015, but refused to discuss who he’d vote for. Cooper said at the time that Trump is “a doer, not a sayer” and that’s what Americans care about. Before that, Cooper supported George W. Bush and criticized Bruce Springsteen, James Taylor and Sheryl Crow for supporting John Kerry, which he called “treason.”