This weekend’s Oscars was a constant drumbeat of Hollywood preaching, and even Piers Morgan has had enough. In a surprising op-ed, Morgan criticized the celebrities at the awards show for their nonstop political lecturing to the audience. 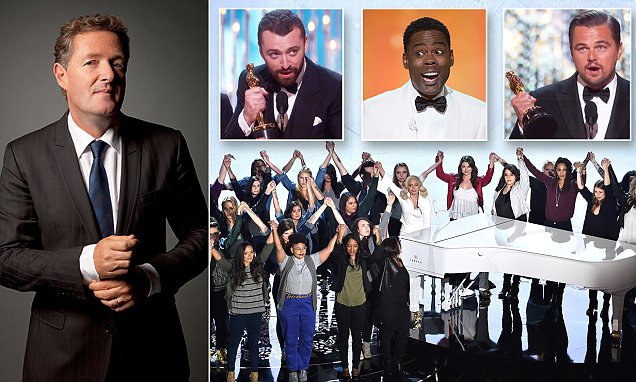 Watching the Oscars last night became an assault course of the senses, a barrage on the brain, a veritable crushing of the cerebral mass.

By the time Leonardo DiCaprio walked up on stage to collect his first and long-overdue Best Actor award, I was on my knees praying for him to just smile, thank the Academy, then his mum, and tell us what this moment means to him.

Not, for the love of God, deliver yet another award-winner lecture on global affairs.

The decision by the show’s producers to ask nominees to provide names of those they wished to thank so they could be scrolled across the bottom of the TV screen rather than tediously recited on stage, fell prey to a new horror: the worthy statement to the world.

A horror in which the whole point of everyone being there or watching at home – to celebrate great acting and movies – was usurped by a burning desire to pontificate about sex abuse, racism, honour killings, corporate greed, climate change, paedophilia and gay rights.

Host Chris Rock set the tone right from his opening monologue with a relentless onslaught on both the Academy’s shocking failure to nominate a single black actor and the massively over-the-top protests by black stars that followed.

He was undeniably funny, and he could hardly ignore the issue given all the pre-show controversy.

But was it really necessary for Rock to bang on about it all night long?

Or to talk of rape, lynching and ‘grandmother swinging from a tree’, when so many kids are watching at home?

His final plaintive cry of ‘Black lives matter!’ was surely an unnecessary endorsement of a current African-American activist movement?

By then he’d more than made his point about diversity.

… The ‘Big Short’ director and screenwriter Adam McKay railed against corporate corruption in the political system.

‘If you don’t want big money to control government, don’t vote for candidates that take money from big banks, oil or weirdo billionaires,’ he raged.

What and who do you think controls Hollywood, exactly?

… Sex abuse became almost a theme of the night.

The producers of Best Picture winner, Spotlight, a triumphant validation of the declining art of investigative journalism, did a Trump and whacked the Pope.

‘This film gave a voice to survivors,’ said Michael Sugar, ‘and this Oscar amplifies that voice, which will hope will become a choir that will resonate all the way to the Vatican. Pope Francis, it’s time to protect the children and restore the faith.’

Vice-President Joe Biden promoted the White House campaign It’s On Us, which aims to stop sex assaults on US university campuses, urging us to ‘take the pledge’ that we ‘will intervene in situations where consent has not or cannot be given.’

Lady Gaga then put the campaign to music, singing Till it Happens To You, reflecting her own well documented abuse as a victim.

To ram home the point, she brought out dozens of survivors of abuse onto the stage with the words ‘not your fault’ on their forearms.

This all seemed so heavy-handed for ‘entertainment’ at an awards show.

Even Jenny Beavan, the British costume design winner from Mad Max: Fury Road, felt the need to make a plea for us all to be kinder to each other and the planet or we’ll all end up in Apocalyptic hell like the movie.

Hey, remember when Hollywood used to be about entertaining people? Maybe one day they can focus on that instead of trying to force all of their little pet causes onto everyone.