Meryl Streep Finally Speaks Out On Weinstein, Who She Called ‘God’, After Pressure From NYT Expose [VIDEO]

It’s no secret that I have less than no use for Meryl Streep. I never have. Four days after the New York Times outed Harvey Weinstein for being a sexual predator against women, Streep has finally condemned him. This is a man she once called “God.” She made her statement through the Huffington Post and now says that the claims against the embattled film boss are “inexcusable” and called the women who made the allegations “heroes.” That’s funny… because Streep has surely known for decades what a pig Weinstein is and she’s only now speaking up. Go figure.

“The disgraceful news about Harvey Weinstein has appalled those of us whose work he championed, and those whose good and worthy causes he supported. The intrepid women who raised their voices to expose this abuse are our heroes,” the statement reads. “I didn’t know about these other offenses: I did not know about his financial settlements with actresses and colleagues; I did not know about his having meetings in his hotel room, his bathroom, or other inappropriate, coercive acts,” Streep said. Do you believe that? Because I don’t. All of Hollywood knew about his predilections and his settlements. Streep had to know as well. She just chose to ignore the whisperings and his actions as just part of doing business in Tinsel Town. 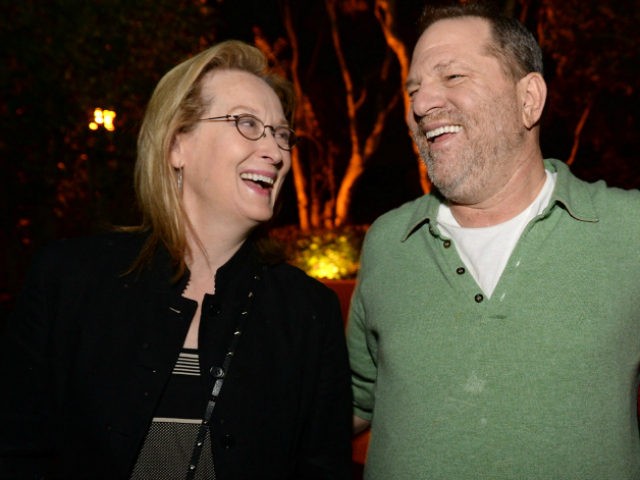 Please spare everyone the protestations. It’s just one of a million dark little secrets to come out of Hollywood and no one believes Streep at this point. I doubt she even believes herself. She’s claiming that “not everybody knew.” Oh, bull crap. She’s claiming that there were Hollywood insiders and veteran journalists who just weren’t aware that he was such a scumbag. Seriously? Everyone knew and looked the other way because that’s what you do in Hollywood. Pardon the saying, but you don’t crap where you eat.

“And If everybody knew, I don’t believe that all the investigative reporters in the entertainment and the hard news media would have neglected for decades to write about it,” the actress said. Sure they would have. Weinstein had a tremendous amount of power and pull. No one wanted to cross him or rock the boat. So, a few actresses had to give a little to get a lot… it’s pay to play in LA baby. Shut your mouth and you’ll keep working. Open it and you’ll be blackballed. You might want to ask James Woods about that.

Merle Streep on Trump: "Evil prospers when good men do nothing" … Like she did for 20 years, winning Oscars. pic.twitter.com/6EutGqeDe6[2]

One reporter after another is claiming that the senior management at news outlets, like the New York Times, spent years spiking stories about Weinstein using his power to take advantage of young women. The liberal media was told to mind their own business and let Hollywood be Hollywood. So, everyone was silenced for decades as this guy sexually harassed woman after woman after woman. Peter Baker, a Times reporter, said nearly 40 phone calls to Hollywood industry insiders went unanswered. Even now when it is obvious that this is exactly what happened, no one wants to touch it, much like Weinstein himself. By the way… he’s not denying any of this. He’s just sorry he got outed.