These celebrities are so caught in their own worlds that they think of everything as a casting decision. 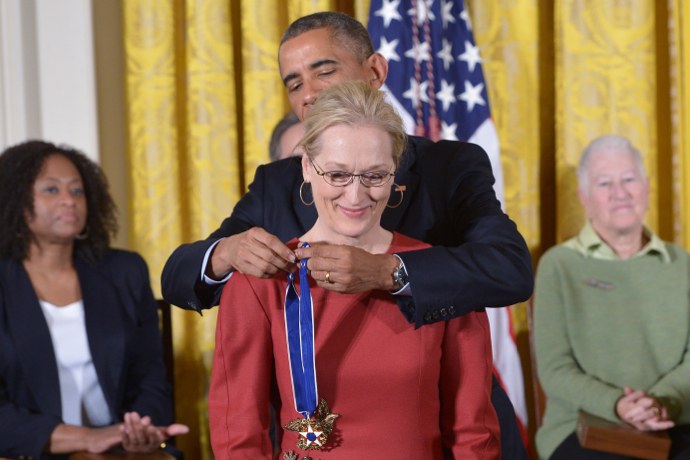 Before this, Barbra Streisand was crying that if this was a movie[2] you’d say the plot was bad. Lefties with terrible college degrees compare everything to Harry Potter[3], or the Handmaid’s Tale. Please, read another book! Maybe a history book! Real life will never look like fiction, because a fictional novel has a clear beginning and end.

So actress Meryl Streep is daydreaming about the Oprah presidency floated by left winger Bill Kristol the other day after Winfrey gave a speech at the Golden Globes. Nobody I know watched the Golden Globes. Even the dozens of journalists and media-thingies I count among my friends didn’t watch the Globes, only a clip or two. Nobody even knows what the difference is between the Globes and the Oscars. Anyway, Oprah puffed herself up to speak about women all while conveniently forgetting that her implicit approval of her friend Harvey Weinstein allegedly led to the rape of an upcoming actress.

Back to Meryl, who after working in entertainment for decades is clearly in touch with the modern man waiting to see if they’ll be getting an extra $50 or $60 on their next pay stub thanks to the Trump tax reform, is casting her dream cabinet. Her dream cabinet. It looks like a nightmare to me.

So Streep appears on Jimmy Kimmel’s show to talk politics, and she floats her ideas for ideal cabinet positions. While you and I might be buzzing about how lovely it would be to have Trey Gowdy on as a special prosecutor to go after Hillary, or how funny it would be to put Ann Coulter in charge of drafting an immigration bill, the Obama loving Streep thinks Harrison Ford should be running defense, and The Rock should be the new Joint Chief of Staff.

If we’re going to play make believe and pick Hollywood actors to be in charge on the hill, I’d prefer to see Adam Carolla for education, and uh, um, I can’t think of anyone else in entertainment. I watch a lot of movies but that’s for when work is over and I turn my brain off. Dwayne ‘The Rock’ Johnson had previously said it was a “real possibility” that he would run for President.

Streep also agreed that Tom Hanks seemed “ready to go” and was very happy to be interviewed by Kimmel who never once asked her about her association with Harvey Weinstein.

Last year at the Golden Globes, Streep took on the persona of a victim by attacking Trump for allegedly giving an impression of a disabled reporter, saying that the jab broke her heart.”

You can watch the three minute interview here: