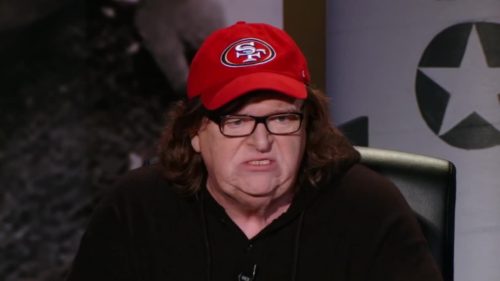 Here’s what we call people who constantly talk about race, write about race, think about race, teach their children about race and see race as the root cause of every issue in our nation. We call them RACISTS[2]. See, people who aren’t racists don’t immerse themselves in race related thoughts and situations 24 hours a day. They actually live their lives, treating everyone the same, no matter what color they are.

Noted racist and “documentary” film maker, Michael Moore recently tweeted out about the mess in Charlottesville. He said, “Trump’s America: The last days of White rule. It’s always a b**ch to have to give up power you’ve held for 300 years.”

Trump's America: The last days of White rule. It's always a bitch to have to give up power you've held for 300 years https://t.co/2OKcWZc8bA[3]

He got some pushback from Twitter users who are tired of the racist foolishness he’s been shoveling out for years.

As a liberal, I would like to apologise for ALT LEFT constant race baiting and pandering 2 SJWs. Moore & MSM have RUINED our core values.

Cheering the downfall of white people is EXACTLY how we ended up in the position.
Racism doesn't stop racism.
You are part of the problem. https://t.co/IsJII0Sb0h[8]

Yesterday’s situation in Charlottesville is the nightmarish outcome of years of racist ideology being pushed by extreme factions on both sides of the political spectrum. Here’s the truth; anyone thinking that any group of any color, is superior to every other group or color, is just plain racist and wrong. White supremacists, Black Lives Matter; they both engage in hate. Antifa engages in violence and calls it protest and they also engage in hate. The evil perpetrator Alex Fields, who mowed down and killed three people and injured numerous others, engaged in hate. There were no good guys in Charlottesville yesterday, only haters battling each other to see who could hate the most.

America is tired of racist factions of every color, masquerading as protest groups or political organizations. They are nothing more than haters and bigots who are making it very unpleasant to be in a lot of places in this nation. We are done with the haters. We are done with anyone who thinks violence is a form of protest. We are done with every group whose ideology includes the idea that they are superior to, or more valuable than others.

It’s time to take our cities and towns back from the thugs, the haters, the vandals, the rioters, the arsonists and the looters. It’s time to take back this nation from the racists of all colors. It’s time to relegate these haters to the ash heap of history and move on to freedom and friendship in this great nation we have been given by the bloodshed of patriots for over 200 years. We have a great gift in this country. Let’s not allow racists and haters like Michael Moore to soil it. Hey Michael, didn’t your mom ever tell you that if you don’t have anything nice to say, don’t say anything at all? We are done with you. Time to crawl back under your rock.