Michael Moore Claims Trump Election Was Illegitimate: He Has ‘NO RIGHT To Enter The White House’ [VIDEO]

Michael Moore claims Trump winning the election was illegitimate and that Trump has no right to enter the White House. Well, Mister Moore, who looks like an obese feminist lesbian, clearly doesn’t know how elections work. It goes like this – 62 million people voted for Trump and he won, therefore he was crowned the leader of the free world, and now his home is the White House. So yeah, I think Trump has at least a little bit of a right to enter the White House. He’s going to be there for at least four to eight years, so get used to it. Maybe Michael Moore should make a documentary about imaginary Russians hacking our brains and forcing us to vote for Trump. That might be his best work yet.

Michael Moore hates Trump so much that he donated 10K to the theater who supposedly murdered Trump in an act of dramatic theatrics during the Julius Caesar play. 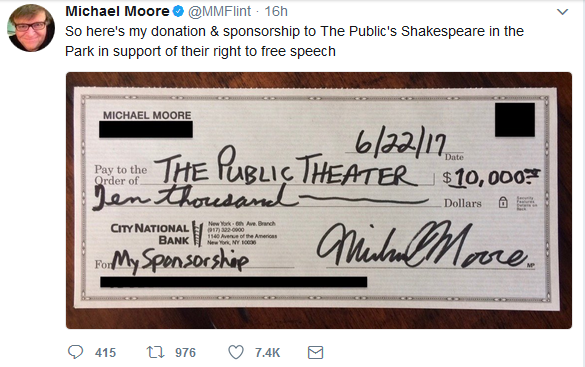 Moore says he’s doing it because “conservative media bullied” corporate sponsors into withdrawing their support of the play that caused scandal by staging Trump’s “assassination.”

Personally, I think Trump probably did win that vote if you took voter fraud out of the mix and counted absentee voting from the military. But it doesn’t matter… Trump was elected fair and square and tomorrow, the Electoral College votes and it will be done. The NAACP is screaming bloody murder over it and calling it a coup. They are also upset that the outgoing Republican governor in North Carolina just submitted a bill severely limiting the powers of the incoming Democratic governor. What a bunch of whiny weasels.

Who cares if Michael Moore donates to a group who puts on plays for the public. No big deal. And honestly, who cares if Trump is assassinated in a play? If you know anything about Julius Caesar, then you would know that everyone is killed off in that play, so it only makes sense that the person who was symbolic of Trump gets offed like they should. Big deal folks. If a group wants to do that in a play, then who are we to complain? Are we a bunch of whiny liberals who complain about everything and get offended? No. And if you complained about that, then you better check your self out, because you might be a closet liberal. If you complain about a play and don’t even know anything about the play (they all perish), then you need to reevaluate your behavior.

Moore wanted everyone to fight Trump’s victory all the way to election day. They did, but nothing changed. The left is still fighting the Trump victory and nothing has changed. If anything is different now, it’s that people have a really sad opinion of liberals. It’s as if liberals have a 0% approval rating with the rest of America. People just get tired of hearing all the crying and complaining. Even worse, the left is now resorting to violence with their little basement dwelling Antifa people. They’re protesting and they don’t even know what for. To make it more impressive, they’re using violence and still accomplishing NOTHING.

Nothing is changing folks. Trump won months ago and that’s just how it is. Get over it and move on. Make REAL progress and stop lowering your standards and acting like babies.

If you’re going to wet diapers, then you may as well identify as a baby. You freaks on the left identify with everything else, so may as well grab a box of Luvs and a pacifier too, because you’re just big adult babies putting on a temper tantrum for America.