Michael Moore PLEADS To Trump Supporters: ‘You Have Every Right To Be Mad, The System Failed You’ [VIDEO]

Michael Moore[1], for a long time now, has insisted that Donald Trump will win the election. Personally, I think he is doing it to promote his new documentary. I also suspect he has struck some kind of deal with Breitbart and Steve Bannon. Nevertheless, his documentary is called “Trumpland.” In it, he says Americans voting for Trump are giving the biggest “f–k you” ever recorded in human history to the powers that be. And he may just be right. Many of Trump’s supporters want to burn it all down. They are angry and disaffected. They’ve lost everything… and that is a very dangerous place to be in a country… it is what gives birth to revolutions.

I’ve never liked Michael Moore. In fact, I detest him. But I have never thought he was stupid or crazy either. He’s in it for the money, plain and simple. He says he hates Trump… that he is vile… but he evidently doesn’t mind capitalizing on his popularity with Americans. He tells people to support Hillary Clinton, who is a monster beyond belief. His argument will actually do the opposite of what he says here and will get more people to vote for Trump. 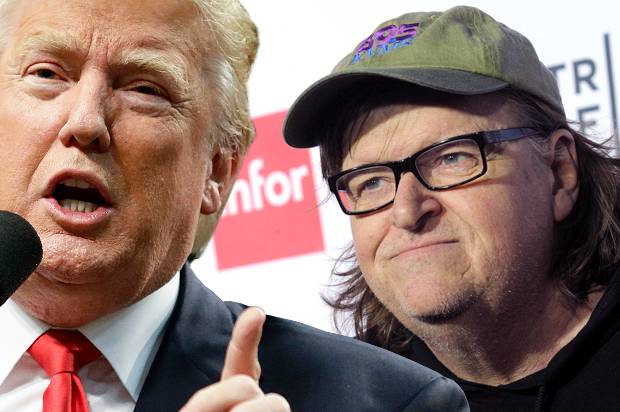 Thursday on Fox News Channel’s “The Kelly File,” liberal documentary filmmaker Michael Moore reacted to the hype received for a clip from his documentary “Trumpland,”[3] which he said voting for Republican presidential nominee Donald Trump would be the biggest “f–k you” ever recorded in human history.

In his appearance on Fox News, he wanted clarify his position on Trump, who he described as the “most disgusting vile candidate that has ever run for office in this country.” He urged viewers not to support Trump, but support his opponent Democratic presidential candidate Hillary Clinton.

“So I am here — I am here on Fox to appeal to people, to people who are watching — do not do that,” Moore said. “I understand why you’re angry. You have every right to be angry. The system has failed you, but he is not the solution to this.”

“The point is We have a choice between somebody who is smart, who has a heart, who is going to stand up for families and for kids and for working people,” he said. “And we have a billionaire who just says these things, trying to pretend that he cares.”

Hillary Clinton is brutally smart, arrogant and incompetent all at the same time. She does not have a heart OR a soul that we are aware of. As for caring for families, kids and working people, don’t make me laugh. She only cares about herself. She is even more vile than Trump. It’s beyond hypocritical to get up on media shows and go after Trump while telling blatant lies about Hillary Clinton. Fail.

The system has failed everyone. It’s failed because of Progressive Marxists like Barack Obama and Hillary Clinton. They will just finish us off. I think Trump could do the same. It’s a no-win contest for America and people are only going to get much angrier from this point forward. Especially at self-serving buffoons like Michael Moore.