Mindless Ladies Of The View Drop Their Opinion Of Trump Airstrike – Come Off As PSYCHOS! [WATCH]

The cloven hooved harpies[1] of The View are screeching that President Trump’s proportional strike against a Syrian airbase was unconstitutional. Bull crap. The War Powers Act was expanded after 9/11. If Trump felt it was in the national interest, and he does, he has the executive authority to strike a perceived enemy. Now, moving forward… further actions and a declaration of war require Congressional review. Trump’s move was strategic and very much needed. We are long past when this step should have been taken. It sent a clear message to Assad and the Russians that we will no longer stand for the horrific use of WMDs. And Russia is threatening to use more against us.

I support the actions of President Trump this week. He did the right thing. It showed strength and reassured our allies as well. Of course the hose beasts of The View disagree with me and have suddenly become enamored with Constitutional law of which they know less than nothing about. They are now calling Trump a dictator for responding militarily to Assad’s butchery. Trump did nothing illegal or unconstitutional and in fact, it wouldn’t matter what he did, they would still be calling it illegal and screaming for impeachment. 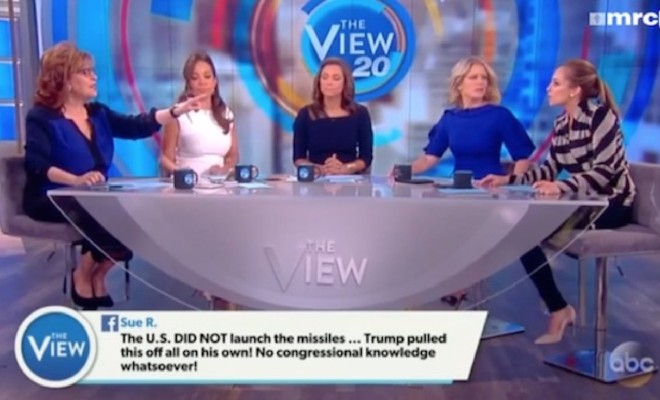 Despite some bipartisan agreement that Trump’s action was within constitutional bounds, as far as most of the women on “The View” are concerned, Trump has already exceeded his congressional authority. Co-host Joy Behar addressed former President Barack Obama’s “red line” in Syria. She correctly noted that Obama did seek Congress’ approval for military authorization there. No congressional vote — and therefore no strike — ever happened.

The Obama administration did, however, launch airstrikes in Syria against the Islamic State under congressional approval granted after 9/11.

On Thursday night’s airstrikes, though, Hostin made clear her opposition, even suggesting the move by Trump made him a “dictator.”

“If you look at the War Powers Act of 1973, it made it very clear that a president cannot act like this without Congress, and there are good reasons for that,” Hostin said. “In 2001, after 9/11, certainly, it was broadened. Those powers were broadened, but only to the extent that the national interest — basically that there would be a direct attack on the United States.”

The US along with Russia and other nations has signed treaties that forbid the use of chemical weapons. It was incumbent on the President to respond to an open violation of those treaties. So, get a grip already. Our allies in the Middle East are voicing overwhelming support for Trump’s actions. Those that eschew interventionism for nationalism do not understand how the game is played and frankly don’t understand geopolitics even remotely. There comes a point when you must slap an enemy and I would say gassing babies is one of those points. This was a warning to Assad and Nikki Haley is warning the UN that further actions will be taken if necessary. The Obama era of foreign policy is dead and good riddance.

Peace through strength is the only way to go. This is something that the hags of The View refuse to grasp. How do you get to ‘dictator’ for stopping the gassing of babies? Evil shows itself many times in the form of inaction. They claimed Obama would have been impeached for this action. Oh, bull crap. Obama drew red line after red line and did nothing. If he had done this, it would have been the right thing to do. But Obama was a Marxist and a coward… dead children are not even real to him. I guarantee you that if Obama had done this, the Medusas of The View would have been cool with it. They utilize the politics of convenience to justify their stances. I just call it hypocrisy.

Assad is a brutal dictator who must be held account for atrocities. But the President's failure to seek congressional approval is unlawful

This is an act of war. Congress needs to come back into session & hold a debate. Anything less is an abdication of our responsibility. https://t.co/GvHML3ByeI[4]

I support the admin’s strike on the air base that launched the chemical attack. I hope this teaches Assad not to use chemical weapons again.

My statement on tonight's U.S. missile strikes in Syria pic.twitter.com/nLcHq6jS01[7]

[email protected][9], Congress must do its duty & come back into session at once to debate use of military force in Syria. https://t.co/hcxcyN9UUC[10] pic.twitter.com/eJNO4D6Gor[11]