Miranda Lambert Will be Heartbroken When She Hears About THIS

I’m sure Miranda Lambert[1] is sick to death of hearing about her breakup with Blake Shelton. Shelton is now romantically involved with No Doubt singer, Gwen Stefani. Both appear on The Voice together as hosts. Word has it that Lambert is “so over” the new love-struck couple and who can blame her? It must be very hard for Miranda to watch the very public displays of affection between her ex and his new heart’s desire. Lambert is now wondering since the affair is so blatant whether Shelton is deliberately trying to hurt her. I kind of doubt that, but who knows? Miranda can’t stand to watch The Voice anymore and she feels the whole gushing lovefest between Shelton and Stefani is just ridiculous. I think Miranda just wants this put behind her so she can move on. She doesn’t want constant reminders of her lost love shoved in her face all the time. 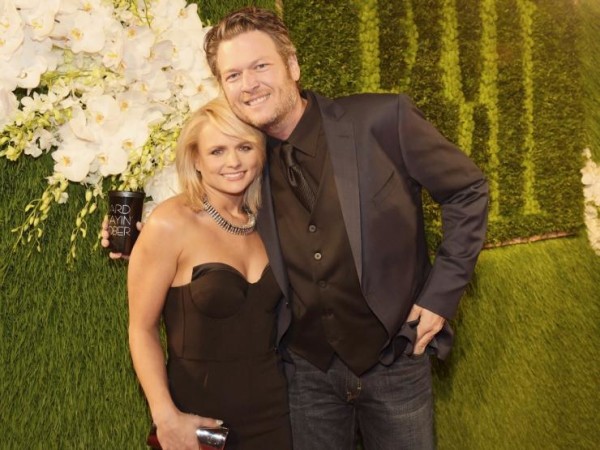 Rumors continue to swirl about country singer Blake Shelton and his ex-wife[3], Miranda Lambert. The reports have been seemingly endless since Shelton started to date his new girlfriend, “The Voice” coach Gwen Stefani, but the most recent gossip claims Lambert is “so over” the new couple.

Shelton, 39, playfully nibbled on Stefani’s shoulder in a new photo and the PDA infuriated Lambert. “Miranda is now wondering if he’s doing this just to push her buttons. She can’t even bear to watch ‘The Voice’  or even hear about it. It just seems a bit all too pushed and not authentic to Miranda,” an insider told Hollywood Life[4] in an exclusive story Tuesday. “Miranda is so over Blake’s over-the-top gushing over Gwen. It’s to the point where it’s just ridiculous.”

But Shelton can’t help but be publicly affectionate with Stefani, Hollywood Life wrote in a different story Tuesday. Her fashion sense is a major turn-on[5] for him. “Every time you think she can’t look any better, [she does],” he told Access Hollywood[6] Tuesday.

The couple flirted during commercial breaks on “The Voice” Monday, an insider told Us Weekly[7] Tuesday. They were spotted giggling and whispering throughout the night.

Part of the reason Lambert might be upset is because she still wanted to be friends with Shelton — but he’s too busy with Stefani. “She would love to at least still be friends with Blake and talk from time to time, but he’s so enamored with Gwen that he doesn’t have time for anyone else, especially for Miranda,” an insider told Hollywood Life[8].

The engagement rumors probably don’t help, either. When Shelton performed his new song, “Gonna,” Monday, he sang, “Gonna put a rock steady on your hand.” Many quickly picked up on the fact that “Rock Steady” is the name of No Doubt’s 2001 album.

There is no doubt that Blake Shelton and Gwen Stefani are in love. It shows in everything they do and say. Shelton is smitten with the allure of Gwen. Who knows if that will last. They act like teenagers in love or lust. There may be jealousy involved here. I know that Lambert and Shelton want to remain friends, but that will be hard to do as they move on to other relationships. Right now, there is only room in his life for Gwen and Miranda needs to find a new love of her own. Now comes the rumors that Shelton and Stefani are engaged. That would be a whirlwind romance if there ever was one. Miranda and Blake need to go their separate ways and everyone needs to let them be for a while. There is way too much emotion rocking this boat. 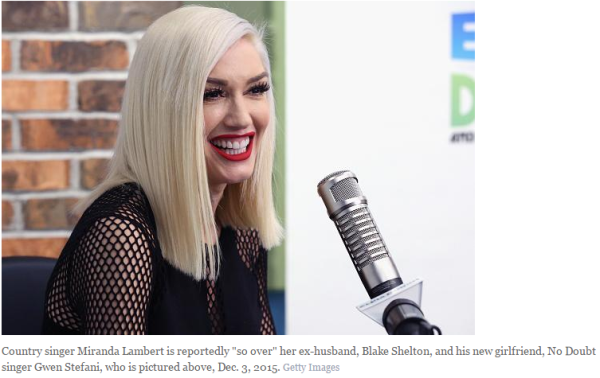